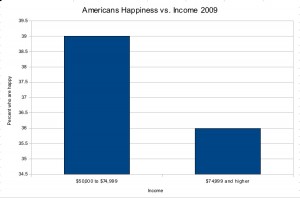 How many Americans are happy today and what makes them happy? Good jobs? A high income? Family and friends? Researchers set out to find the answers to these questions by polling 2,401 adults in the United States online between April 13 and April 21, 2009. The results were a little surprising given the current state of the economy and the popular belief that money is the greatest source of happiness of all.

A little more than one third, 35 percent, of Americans said, last year and this year, that they are very happy in response to a Happiness Index online poll. Surprisingly, income did not equate to happiness among survey respondents. The group with the highest happiness index (39 percent) had an income between $50,000 and $74,999. The next group, with a 36 percent happiness index, earned $75,000 and higher.

The poll also revealed that women who responded are slightly happier than men (36 percent versus 34 percent); and married women respondents are happier than single women (38 percent versus 34 percent). The survey also indicates that those with a high educational level tend to be happiest: while 33 percent of individuals with a high school or lower education said they are happy, 36 percent of respondents with some college and college graduates are happy, and 39 percent of those with a post graduate education are happy.

More Democrats were happy this year (from 33 percent to 36 percent) and fewer Republicans (39 percent to 37 percent). The researchers believe the changes may be related to the election of President Obama.