Oyeme! White Latinas Have Rhythm, too! 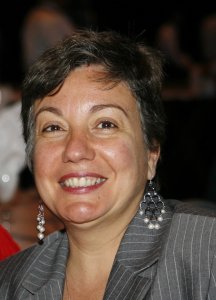 The other night I celebrated my fortieth birthday with a couple of my closest amiguitas, at a well-known Latin dance club in the Bronx.  When we arrived, the place was crowded with well-dressed couples moving in sync to the roaring rhythms of Celia, Machito and el bárbaro del ritmo, Beny Moré.

We found a table next to the bandstand and ordered drinks.  Before I had a chance to pull my black, spandex-sequined dress over my hips, Sonya*, one of my “traditional-looking”, almond-eyed-olive-skinned Latina friends, was on the dance floor working-up an enviable sweat. One by one, mis hermanas got to strut their stuff in the arms of elegantly-dressed, cologne-scented Latinos. Three rum and cokes later, I was still keeping clave with my right foot, wondering when it would be my turn to rumbear a todo lo que da. “Castellano que bueno baila usted” was in full blast, so I grabbed Sonya and made a mad dash to the floor, unleashing the pent-up fury that had been building in my Cuban-, Italian-American hips.  Instantly, two debonair caballeros  stepped in.

That morning I went home feeling fabulous at forty, despite the havoc my patent-leather, spiked-heel pumps had wreaked on my legs. After a few hours of rest and two cups of Cuban coffee, I shared the evening’s details with my sister.

“Did you dance?” she asked.

“Only after having danced with Sonya,” I answered.

“When will these guys stop mistaking you for una blanquita?” she asked.

The feelings of exclusion I had experienced at the discoteque were not new. As a child growing-up in the 1960’s, in what is known today as the South Bronx, I spent my early years comfortably weaving my way in and out of ethnically diverse groups, except when it was time to jump rope with mis panitas. To be accepted into their clique, I had to address the group in Spanish proving that, despite being light-skinned, I, too, was part of la familia.

Things were not any different on the other side of the Mississippi. As a young adult earning my college degree in the Southwest, the Spanish-speaking locals criticized my boyfriend, who was Chicano, for dating una gringa. Once they found out I was Cuban, the Mayan sisters chided him for reaching out of his culture.

Racial misconceptions among Latinos regarding how we should look, dress or sound are, it seems, as old as Matusalén and not limited to gender, geography, age or class. A 35-year-old percussionist friend of mine, for instance, was raised in Brooklyn and Cayey, Puerto Rico. However, the people he meets at gigs think he’s italiano. “The musicians I play with and the women I meet at the clubs don’t believe me when I tell them I’m Boricua,” he complains. “Then, when I rap to them in Spanish, se encabronan because I speak it better than they do. ¿En qué quedamos?”

Similarly, an accomplished psychologist in his fifties told me his colleagues, Hispanic and otherwise, commonly mistake him for being a White, Anglo-Saxon Protestant. “The irony is that many of the latinoamericanos  who think I’m Anglo, are just as fair-skinned as I am,” he said.

Entonces, ¿cuál es el problema? The problem is that I can’t understand how a community that insists that non-Latinos respect the fact that we are un ajiaco of cultures, colors and circumstances seems to forget that we come in all shades when we deal with one another.

Understand what I am saying. I am not one of these frijol-counting, nit-picking, pea-brain lloronas. I know the slights I’ve experienced are minor compared to the racism my darker-skinned brothers and sisters face everyday. Discrimination, however, is discrimination; no matter who is doing the excluding. True ethnic and racial pride, on the other hand, can only be realized when what we feel in our hearts takes precedence over the circumstances of how we look and sound.

Interestingly, there have been one or two occasions when my mistaken identity has worked for me.  Several years ago, while traveling home from work on a crowded New York subway train, I overheard two Hispanic men plotting, in Spanish, how they were going to relieve me of my wallet. Little did they know that not only was I Latina, but fluent in the language. At the next station I got off the train and waved, ¡adiós amigos!
As disturbing as the incident was, the ironic victory I had experienced on the D-train represented another jewel in my mother’s corona.

Mami, who proudly spoke English a su manera, was constantly being criticized by her non-Hispanic neighbors for speaking to her children in Spanish. After all, we were in A-M-E-R-I-C-A; and in their United States one only spoke English. Unintimidated, she casually dismissed their ethnocentrism by saying, “¿Qué se puede esperar? Son americanos”, and continued to speak to us en español.

Along that line, I keep promising myself that one of these evenings I’ll have los cojones to sidle up to one of these papitos lindos I see at the clubs and say, “Oyeme, white Latinas have rhythm, too.  ¿Quieres bailar? “

*Not her real name.

Sarah R. Bisconte is a Cuban/Italian-American public relations consultant in Westchester County and a Charanguera extraordinaire.

3 Responses to Oyeme! White Latinas Have Rhythm, too!