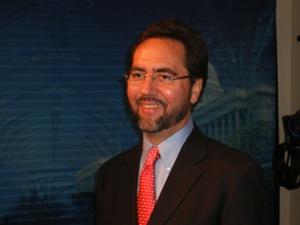 My relationship with the Hispanic media started in 1995, as a member of a group of journalists that broadcasted news to Latin America through Telenoticias, a venture that combined investments from Reuters, Telemundo, Grupo Clarín and Atena 3; and that later became CBS Telenoticias and Telemundo International1.

That was the beginning of my immersion and acculturation into the values of journalism in a democracy where freedom of expression prevails. It was also the catalyst for my connections with journalists from all over Latin America and Hispanics born in the United States with strong ties to their Latin roots. This experience was my key to understanding this fascinating phenomenon called the Hispanic media.
Working in Latin American broadcasting based in the United States, I understood the challenging situation in which Hispanic journalist live, having to be experts in both the United States and the Caribbean, Mexico, Central and South America.

Being Hispanic, mainstream media constantly requested information or opinions on Latin American issues from us. This included politics, economics or social issues in hot spots such as Cuba, Mexico, Colombia, Peru, particularly under Fujimori and Venezuela under Chavez, among others. At the same time, Latin American media requested facts or information on the United States’ issues, such as the Clinton/ Lewinsky’s scandal, the bombing in Oklahoma, OJ’s and Michael Jackson’s trials, the financial turmoil in Asia and Latin America in the late 90s, the 911 terrorists attacks and more recently Obamas’ path into the White House.

Hispanic journalists quickly became globalized reporters, with a natural ability to navigate in both worlds.

From the PR perspective, this notion becomes relevant when you are developing relations with the Hispanic media. The first thing you try to do is to establish an emotional connection with your media contact (yes, because journalists and public relations professionals are partners in informing the public about topics or issues that are relevant to them). What a better way to break the ice and forge a lasting relationship than talking about culture, a universal language.

This becomes really easy when the journalist you are talking to shares your country of birth. Conversations that I have had with journalists from Mexico have lasted hours when speaking about Mexican cuisine (¡qué increíbles chiles en nogada sirven en La Fonda de Santo Domingo cuate!), music (from Jose Alfredo to RBD (did the really sing?)), sports (el América, las Chivas, los Pumas y ahora “Los Indios de Ciudad Juárez” ¡arriva el norte!), literature, and very carefully about politics. But when you share democracy and freedom as your main values, you can even discuss politics openly. Sometimes it is more challenging when your journalist contact is from or has its roots in a different country than yours, although I have found a natural empathy with Colombians (which are becoming dominant in the Hispanic media, because they are meticulous journalist with one of the highest standards of journalism in the U.S.) and Cubans, although the discussion can become tense and unfruitful when talking about the Island’s path to democracy. And yes, with the Argentineans, my dear “ches”, it must be the passion for “fútbol”, pronounced with the accent in the “u” and not in the “o” as Mexicans do. “¡Pero qué momento!”

All these conversations can lead to the culturally relevant angles of the PR initiatives and stories you are developing for your clients. Through these intense interactions, when they happen, you not only learn about the journalists’ interests but also about your target audience’s interest, particularly now when digital media receives innumerable amounts of feedback through forums, blogs, and emails. They are the great receptors as the radio hosts continue to be. Just take a look at “El Piolín’s” popularity. He recently met with President Obama!

That is why it is so valuable to attend journalists’ gatherings organized by the National Association of Hispanic Journalists. I noticed certain differences in the last one I attended. The majority of the participants were Hispanics born in the U.S., and they spoke mainly in English, even though they worked for Spanish-speaking publications.

This trend might represent a new challenge because the Hispanic connection is not constructed as easily as with native Hispanic journalists. The new generation of Hispanic journalists is basically mainstream but they still get reacquainted with their local Latin American roots. They compare the values of both worlds and choose for themselves. When they appear, with the same context and discernments, the new generation of PR professionals will immediately make a connection with their contacts by talking about their abuelitos or primos from Ecuador, or the friends they made in their last trip to Guatemala, or the incredible culinary experience they had in Oaxaca tasting a delicious mole negro or a coloradito. They will mix Spanish with English to get along and continue sharing the passion of being Latino or Hispanic, or a Hispanic Latino, ¡sí señor!

1.This company was later bought by then-Telemundo owners Sony Pictures Entertainment and Liberty Media from CBS and became Telemundo International, which was finally pulled on in 2006.

2 Responses to Working with the Hispanic Media: Share the Passion!