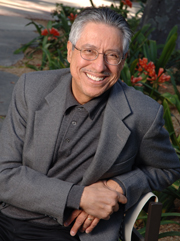 America is witnessing a historic moment: the convergence of aging Baby Boomers with a burgeoning Latino population. That fact draws our attention to the people who fall into both categories: the Latino Baby Boomers, a population that is largely invisible.

Given that key issues such as Social Security, Medicare and pension reform are high on voter concerns in this election year, it is imperative to know as much as possible about this group. My own research thus far suggests that they are especially vulnerable, and the more we know about them, the better our political leaders will be able to address this unforeseen dilemma.

There is a dearth of information about the 10% of Boomers who are Latino. As a whole, the Latino population scores poorly on socioeconomic status. For example, in 2006, only 59% of Latinos older than 25 had a high school degree or higher, compared with 81% of non-Latino blacks and 91% of non-Latino whites. Low education levels lead Latinos into jobs with lower incomes. A recent Pew Hispanic Center report showed annual median Latino personal earnings at $20,124, compared with $22,941 for non-Latino blacks and $30,186 for non-Latino whites. In turn, these low-paying jobs often provide minimal pension and health care benefits or no benefits at all. Census data show that non-Latino whites are three times more likely to have health insurance than Latinos.

The bottom line is that Latinos experience a cumulative disadvantage in economic terms. Despite this, Latinos live longer than the general population, according to the Social Security Administration. These years of increased life add to financial burdens on older Latinos, who typically underutilize savings and retirement accounts. As a result, more than a quarter of Latino households have zero or negative net worth.

As a country, we know we face a crush of Baby Boomers who will soon retire. But we know very little about how well prepared Latino Baby Boomers are for retirement.

This year, a more detailed portrait of Latino Boomers is needed, which will help guide our new president and Congress in shaping public policy.

A similar article was first published in USA Today on September 12, 2008 and was republished here with his permission. Fernando Torres-Gil is the director of A New Latino Agenda: Realities on Aging, Diversity, & Latino Financial Security, a collaborative two-year research project of the UCLA Center for Policy Research on Aging, the USC Ethel Percy Andrus Gerontology Center and the UCLA Chicano Studies Research Center. He holds appointments as professor of Social Welfare and Public Policy in the School and is the director of the Center for Policy Research on Aging.