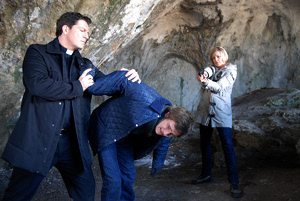 Scene from German series No Mataras

No Matarás (Spanish for You Will Not Kill) features Father Simon Castell (Francis Fulton-Smith), a special commissioner of the Holy See and the Vatican’s personal private eye, and Marie Blank (Christine Döring), his police partner, as a crime fighting duo. Vme plans to broadcast 15 episodes of the hour long program produced by UFA International Film and TV Production GmbH and shot in Rome and Caprarola.

In the program, Father Castell is cast as handsome, outgoing, and tenacious with an atypical personality to match the job the Vatican has assigned him. He is aided in his task by a good sense of humor, a fanatical love of soccer and the ability to crack safes. His partner is a police inspector described as a clever and tough single mom. The two team up to catch crooks and build a sometimes difficult relationship that relies on his knowledge of the church and her knowledge of the streets. The episodes will air at 10 p.m. ET Wednesday nights beginning May 11, 2011.