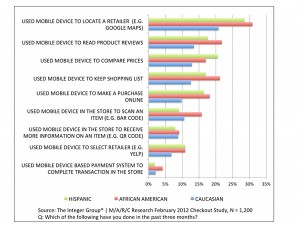 With the increasing popularity of smartphones (mobile phones that combine the features of a cell phone and a computer) and mobile devices marketers want to know if mobile buying behaviors are prevalent among the owners of these gadgets. Estimating that smartphone penetration is nearing 50 percent in the United States, in February 2012, The Integer Group and Marc Research surveyed 1,200 people online, in English, as part of an ongoing shopper behavior study. 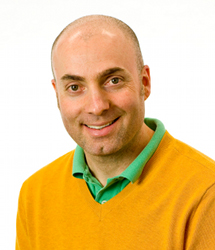 “Basic mobile communication through SMS and mobile websites should be the points of entry. Mobile marketing to multicultural shoppers is a huge opportunity,” said Martin Ferro, senior account planner, Velocidad, a Hispanic promotional, retail and shopper marketing capability of The Integer Group. 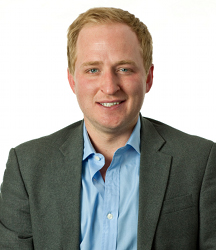 The survey also revealed that nearly as many shoppers said they are using coupons from email and e-newsletters (49 percent) as said they are from the Sunday paper (57 percent). Respondents in households with children seemed more likely to overcome adoption barriers of digital technologies in favor of shopping solutions.

“Digital shoppers are just shoppers,” said Ben Kennedy, group director, Mobile Marketing, Integer. “Digital shopping tools are illustrative of the continued blurring of the on- and offline spaces. Today’s reality is that shoppers use whatever tools they have on hand to make them smarter, savvier shoppers.”

In the surveys, consumers were asked about their shopping attitudes, shopping behaviors, and economic outlook as well as the criteria shoppers use to select retailers, which in-store stimulus is most likely to drive purchase, and factors that might lead shoppers to leave an aisle empty-handed.  The Integer Group is a large promotional, retail, and shopper marketing agency, and a member of Omnicom Group Inc.