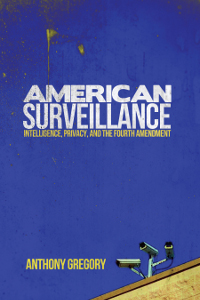 Photo: The University of Wisconsin Press

In American Surveillance Intelligence, Privacy, and the Fourth Amendment (University of Wisconsin Press, $44.95) Anthony Gregory explores the competitive interests of the United States government’s desire for unfettered access to information about its citizens and their right to privacy from undue intrusion. He begins by examining the country’s history in that regard all the way to our Founding Fathers. In this era of increasingly effective technological tools and broadening laws that facilitate a growing number of personal data breaches he concludes that the book asks more questions than it answers.

When asked what inspired him to write the book the author replied by email, “For over a decade I researched civil liberties issues for the Independent Institute, and so this book fit into that larger project. I’d been intrigued by surveillance issues since the war on terror began. Even before that I considered foreign relations and such domestic policies as the drug war to have an affinity in consequences invited more exploration.”

The hardcover 263-page book was published in 2016 in collaboration with the Independent Institute. It is written in an academic style divided into an Introduction, a Conclusion, an Epilogue and nine chapters: Reconnoitering the Frontier, 1775-1899; Foreign Influences, 1900-1945; Espionage and Subversion, 1946-1978; Calm Before the Storm, 1979-2000; The Total Information Idea, 2001-2015; Unreasonable Searches; Fourth Amendment Mirage; Enforcement Problems; and The Privacy Question. It also includes copious end notes and references.

“The main goal was to look at the intersecting issues of security intelligence and privacy rights with fresh eyes,” he said. “These are big questions with correspondingly huge literatures, and I wanted to deliver a contribution that made sense of it all, both providing a balanced analytical approach to multiple complex topics and revealing the more radical implications of what many self-described moderates on both sides of policy controversies advocate.

“I hoped it would reach both scholarly specialists and generalists as well as lay audiences concerned about policy,” he said when asked who was the target audience for the book. “It serves to curate a lot of different literatures and so can be a starting point for many different types of readers. Those in policy seeking simple answers might not find them here, but they will find some material that I hope will enhance their understanding.” In response to questions about the greatest challenge the book posed, he said: “I suppose the biggest challenge was maintaining analytical balance, and satisfying peer reviewers with different perspectives while maintaining an editorially sufficient thesis. I was surprised by many little factual discoveries on the way. I was most pleasantly surprised that some of the scholars on privacy and intelligence I had most admired found the work worthwhile!”

When asked if he found that the violation of privacy rights of Americans was justified by the safety concerns, he replied: “I try to keep some distance between my academic writing and my ideological commitments, but it’s not always possible. I think privacy advocates understate how strong the consequentialist case can be against their cause. But my view on the rightness or wrongness government surveillance is not primarily rooted in consequentialism. That’s why I think it’s more of a cultural question—not even a matter of legal rights—when we talk about privacy and surveillance. And once you know where you stand on that, you have to see what kinds of other government powers correspond to the degree of privacy you want. That often kicks the question to foreign policy or law enforcement, where sometimes measures taken do not even achieve the stated goals on their own terms. So this is a rather big question.”

Gregory is the author of The Power of Habeas Corpus in America: From the King’s Prerogative to the War on Terror, winner of the PROSE Book Award for legal studies. He is a fellow of the Independent Institute in Oakland, California. 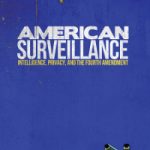