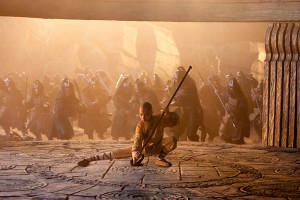 The Last Airbende is an avatar able to manipulate the four elements, Air, Water, Earth, and Fire in the hopes of restoring balance to his war torn world. That’s a heavy burden for a young boy to carry. It is no wonder the story is from children’s television. M. Night Shyamalan wrote, produced, directed and converted an animated Nickelodeon TV series into an action film starring Dev Patel, Jackson Rathbone, Nicola Peltz, Cliff Curtis, Shaun Toub, Aasif Mandvi and Noah Ringer. The Paramount Pictures and Nickelodeon Movies film opens in theaters nationwide July 1, 2010. Scroll down to see a trailer. 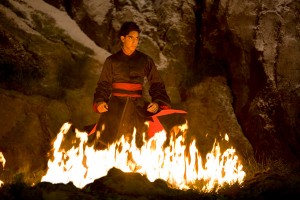 In this first film of the story Aang (Noah Ringer) is caught in the middle of a struggle between his world’s four nations when the Fire Nation declares war against the others. After a century without hope Aang discovers he is the lone Avatar who can manipulate the four elements. The hairless young boy teams up with Katara (Nicola Peltz), a Waterbender, and her brother, Sokka (Jackson Rathbone), to find a way toward peace.