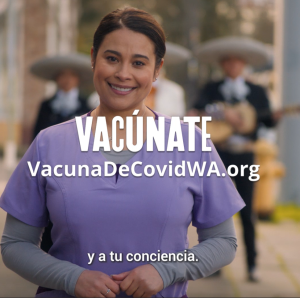 Hoping to reach Hispanics between 18 and 35 years of age hesitant about pandemic vaccines in Washington state with a pro Covid-19 vaccinations message the Washington State Department of Health hired C+C. The Seattle-based marketing agency produced audio and two video spots in Seattle. Production costs for Vacúnate Mijo/a were $168,000 and $205,000 for Mentira Mariachi. The ads were produced for broadcast distribution, YouTube, TikTok and radio. Scroll down to watch videos in English and Spanish (with subtitles).

According to a C+C spokesperson the overall goal of the campaigns was “to increase vaccination rates among the Hispanic community in Washington by tackling key research findings. Misinformation on vaccine safety and efficacy was indicated as one of the main drivers of vaccine hesitancy among this community. While protecting themselves, their loved ones, and their community ranked as the main motivation for getting vaccinated.”

The agency addressed concerns about trust in the vaccines with emotional pleas to family ties, Spanish language and Mariachi music. Tony Teran, campaign writer and creative director, C+C, replied by email via an intermediary, “At the center of the Vacúnate Mijo/a campaign is the relationship between a grandchild and a grandmother or abuela, a much loved and nostalgic figure among many Hispanic/Latinx families, often seen as a trusted voice of reason. We follow their bond through different life stages that showcase the core of our message: protecting each other. The Spanish language is also a powerful connecting thread in these ads, as we hear the word mijo/a express different emotions at different times, a word so simple, yet incredibly purposeful. Abuela is saying ‘I care about you’ with every mijo and ultimately encouraging her grandchild to receive the vaccine.

The idea behind the Mentira Mariachi campaign is that we all listen to the voice of our conscience when making decisions. So, what if that voice came accompanied by trumpets and guitarrón, as in traditional Mariachi music, to remind audiences to listen to science and their good judgement, and not to misinformation? The :30 video spot shows a young guy at home. Every time he is exposed to fake news about the COVID-19 vaccines, he’s surprised by a Mariachi band popping out of nowhere to humorously remind him, with a catchy jingle, that those are mentiras (lies). At the end of the spot, we see him coming out of a vaccination site after getting his shot as Mariachi band members give him a nod of approval and a health care worker delivers the campaign’s tagline: ‘Escucha a la ciencia y a tu conciencia.’ (Listen to science and to your conscience.)”

The Vacúnate Mijo/ ad goal was to encourage community members to get vaccinated by emphasizing the importance of protecting their loved ones during the pandemic; while the Mentira Mariachi ad was meant to dissipate vaccine misinformation by encouraging the audience to “trust science.” 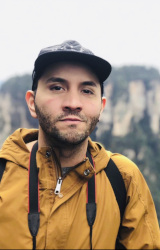 “Creative concepting for both of the campaigns began in August 2021,” Teran replied when asked how many months the campaign project required. “Vacúnate Mijo/a launched in November 2021 while Mentira Mariachi launched in February 2022.

Secondary Research, The Washington State Department of Health (DOH) and C+C worked hand-in-hand with partners like the University of Washington’s Latino Center for Health to analyze insights about vaccine hesitancy among the state’s Hispanic/Latinx population that helped shape the campaign, including a report released by the Center in April 2021. The team also referenced findings of COVID-19 surveys conducted regularly by the Bill & Melinda Gates Foundation/Civis Analytics.”

The campaigns were developed and produced by a team that included members of Washington state’s Hispanic community, including Terán, the creative of Venezuelan roots behind the original concepts. He wrote the video and audio scripts, and oversaw the campaigns’ production process; featured Hispanic cast member for both campaigns; and the production team selected Spanish speaking talent seeking a cultural fit, and with good acting skills and on-camera presence, according to information provided by C+C.

The Vacúnate Mijo/a production included creative input from Mauricio Valadrian, of Valadrian Creative & Consulting; the Mentira Mariachi video production was co-directed by Marvin Lemus, director of Netflix’s Gentefied, and also a Hispanic creative; the Mentira Mariachi video and audio ads feature an original song written for that campaign by a Hispanic musician and performed on-screen by Tacoma-based Mariachi Ayutla, a mariachi band, according to information provided by C+C.