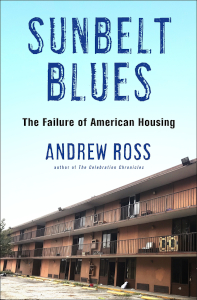 Andrew Ross, professor of social and cultural analysis at New York University (NYU), believes that housing is a human right. To explore housing issues in Osceola County he spent time in central Florida, between 2016 and 2020, meeting with public and private sector representatives, homeless advocates and homeless people living in motels and wooded land encampments. In Sunbelt Blues The Failure of American Housing (Metropolitan Books/Holt, $27.99), a 268-page hardcover book published in 2021, he shared his findings and thoughts about the housing issues in Osceola County and by extension other cities and states he believes present similar profiles and face comparable poverty and housing challenges.

From idea to publication the book he wrote for the general public required five years. When asked other than his salary as a professor at NYU what funding or support, if any, he received toward the book project and from whom he said by email “Research funding from NYU.”

Just how many homeless are there in Florida? That isn’t clear. One wooded area he visited in Osceola County, he says in the book, is home to as many as 15 camps of squatters many suffering from addiction. He pointed to a 2019 study that estimated 44 percent of homeless people in Florida (and 72 percent in California) were un-sheltered. 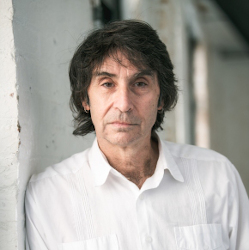 In the book he draws attention to the many people who become unhoused in central Florida after moving there in search of frost free living and jobs and find downward mobility instead. He points to the rise of a “rentership society” across the country. Private investors, whose identities are often hidden, have driven up the price of land, homes and rental rates while at the same time the money leaves the area, making tourist sites such as those in central Florida parasites on the surrounding region, he said in the book. In Sunbelt Blues he called for salary increases and rent control as well as nonprofit and public housing investments to counter the housing crisis in the state.

Just north of Osceola, in world famous Orlando, two thirds of residents are renters, according to his book. The majority of jobs in the region pay under $30,000 a year, he said in the book. At the same time Florida’s largest landowners, the Mormon Church, likely will decide the fate of North Ranch, a possible new city yet to be built for as many as half a million wealthy residents, according to his book.

The author said he will measure the success of the book depending on “Whether the book contributes to policy changes, or to changes in public consciousness (less difficult to gauge).” When asked what responsibility homeless people should have for their lack of housing he replied, “I would turn that question around and ask what responsibilities do employers, elected officials, and the real estate industry have for the lack of affordable housing.”

Given the repeated failures of governments dealing with homelessness what are the chances that local, state or national authorities will fix the problem in the next decade? His reply: “The scale of the housing crisis is so immense that comprehensive solutions are needed. The federal government is gridlocked, but can still do plenty in the way of expanding and upgrading its existing programs, while introducing new programs in public housing and social housing. Many local authorities are hamstrung by preemptive laws passed by state legislatures. These need to be repealed badly to allow counties and municipalities the flexibility they need to respond adequately,”

When asked if the owners of private land where the wood encampments are located are shouldering the burdens of the housing emergency in Osceola County he replied, “Not really. The encampments are generally on land that is not being used. When owners decide to develop the land, the camp dwellers get moved along to other locations.”