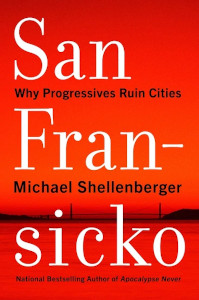 California has serious problems that have resulted in many residents departing the state in search of a better life. So much so that there is a cottage industry of businesses assisting residents to relocate. San Francisco and Los Angeles in particular, have an epidemic of homelessness and untreated addiction as well as a mental health crisis, according to Michael Shellenberger. In San Fransicko Why Progressives Ruin Cities (Harper, $28.99), a 395-page hardcover book published in 2021, he discusses his thoughts on the situation in the city and its environs.

In the book he outlines the notable rise of homelessness, runaway addiction, open use of illegal drugs in public places, rampant crime and mental illness; all of which he thinks have made the area and its streets unsafe and driven tens of thousands of people away from the state and especially from the general San Francisco area. He quotes policymakers, critics, advocates of change, former San Francisco homeless and former addicts.

Hoards of homeless people, often attracted to the city’s progressive policies and economic incentives for the homeless, have made their way to San Francisco and the surrounding areas resulting in frequently unpunished crime by over lenient prosecutors, public use of illicit drugs in parks and streets as well as widespread public urination and defecation in some neighborhoods, he says in the book. He illustrates the situation by explaining that between 2015 and 2018 the city replaced 300 lampposts corroded by urine (after one of the corroded lampposts crushed a car).

San Francisco doles out significant amounts of cash to the poor when compared with other cities; $709 per capita compared to $195, $120 and $.34 in New York City, Chicago and Phoenix, he says. The city’s permissive drug use programs and policies and its refusal to prosecute crimes has resulted in steep increases in the use of heroin, meth and fentanyl and brazen and booming crime. Those issues have made the city expensive, unsafe, and unattractive to many businesses and residents. Between 2008 and 2019, he says, 18,000 businesses such as Hewlett-Packard, Toyota and Charles Scwab, fled the state.

Addressing the underlying issues that have made drug use, homelessness and crime thrive along with fostering policies that improve the availability of housing may pave the way to a possible future solution, he says. Part of the solution outlined in the book would require Californians to agree to more suburbs and development in ranches and farmlands, while leaving the city itself with limited further housing.

He believes the crisis of disorder thriving in San Francisco, Los Angeles and Seattle is spreading east. He describes a neoliberal model of government contracting to nonprofit service providers that are unaccountable as well as unable to address the crisis is underlying “the breakdown of civilization on America’s West Coast.”

Shellenberger is founder and president of Environmental Progress. He authored Apocalypse Never.