In Art of Crime (L’art du crime in French) Eléonore Bernheim as Florence Chassange and Nicolas Gob as Antoine Verlay play unlikely partners who solve murder mysteries in the French art world. The four season series of episodes of about 50 minutes in length is airing on Mhzchoice.com. According to IMDB.com the first episode of the program, in French with English subtitles, dates to 2017. The program has been popular in France with millions of viewers on French television, according to Toutelatele.com.

With the backdrop of Paris, France the episodic show pairs a ditzy yet likeable and capable art expert who works at the Louvre Museum and consults part time for the police’s specialized art crimes unit (l’Office central de lutte contre le trafic des biens culturels or OCBC by its French acronym per Wikipedia in French), with a grumpy criminal career cop who dislikes everything to do with art.

Despite her partner’s deeply unpleasant personality Florence Chassange appears be secretly in love with him. He seems annoyed by her presence although in time he grows to appreciate her assitance. Louvre exterior and interior shots feature prominently as do aerial photos of Paris and parts of Amboise. One of the episodes was shot in the famous Moulin Rouge, according to Tele Loisirs. 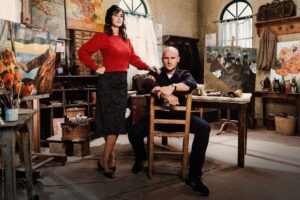 According to Wikipedia in French the series was created by Angèle Herry-Leclerc and Pierre-Yves Mora and the producers were Arnaud de Crémiers and Isabelle Degeorges. The art historian often imagines seeing and speaking with famous artists long dead. Her conversations with the likes of Henri de Toulouse-Lautrec and Auguste Van Gogh help her solve the art puzzles behind the crimes. Philippe Duclos plays the art historian’s intrusive and clingy father, also an art expert and wannabe investigator. A new season may be on the horizon.