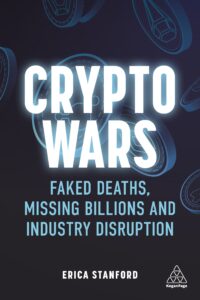 Fraudsters and scammers are conning millions of people out of their life savings every year using cryptocurrency scams, according to Erica Stanford. She says an underworld of dirty dealing and scams has opened around cryptocurrencies. Those behind the frauds are relying on a variety of strategies such as cult-like tactics, celebrity endorsements and events filling Wembley Arena in London, United Kingdom; it’s shockingly easy to be deceived she says in Crypto Wars Faked Deaths, Missing Billions and Industry Disruption (Kogan Page, £14.99). The softcover book was published July 1, 2021.

It took Stanford a year to research, write and edit the book. In it she shares the stories behind the biggest scams on record, including a death faking Canadian founder who escaped with millions, a so called Cryptoqueen on the run from the Federal Bureau of Investigation and a $50 million dollar prank gone wrong. When asked if she received compensation to include or exclude anyone she clarified, via a publicist, that she “did not receive any form of compensation to leave anyone out of the book.”

When asked what is the primary target audience for the book she replied: “Anyone! It’s intended to be fun, light reading, giving an easy-to-read overview of the worst scams and craziest stories of the crypto space.” 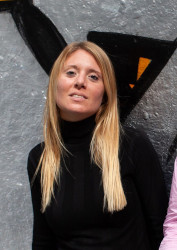 “It was the publishers’ idea!,” she replied when asked why she wrote the book and how she will know if she was successful. “They approached me with the idea to write about the biggest scams in crypto. Successful – gosh, just finishing it, I was happy! I’d never done anything like that before and still can’t quite believe I’ve actually written a book, that it’s published and so many people are buying it! When I saw it in a shop for the first time, WH Smiths in London had made it as their business book of the month. I couldn’t quite believe it when I saw it really prominently displayed on shelves in a shop.”

Regarding the means and specific channels in which she promoted the book she replied, “The publishers have been a great help in this and have got the book listed with retailers and Amazon, as well as organising some PR. I have shared the book widely on LinkedIn and with all my connections in our Crypto Curry Club community, who have been very supportive and helped share it with their networks and in our Crypto Curry newsletter. I also reached out to some podcast hosts, as well as being asked to be on many podcasts and interviews with show hosts who wanted to talk about crypto scams. Most of the time trying to promote the book has been guest appearances on podcasts and writing articles for publications and newspapers who have been keen to feature it.”

When asked what, if any, impact the pandemic continuing may have on cryptocurrencies she replied, “It has raised awareness! More people than ever before, especially younger people, are looking at crypto, aware of some of the failures of fiat, of money printing and inflation and losing trust in governments, and it seems people have also just had more time to look into it.”

“Do an awful lot of research before looking at going anywhere near crypto!” she said when asked what she would advise readers seeking to understand blockchain and cryptocurrencies and considering investing in them. “Andreas Antonopoulos has an incredible book giving insights on Bitcoin called The Internet of Money, it’s a great read.”

According to her biography Stanford is a crypto entrepreneur and expert, who founded the United Kingdom’s biggest crypto network, and a lecturer at Warwick Business School in the United Kingdom. Kogan Page is an independent publisher of business books and content, according to a press release.