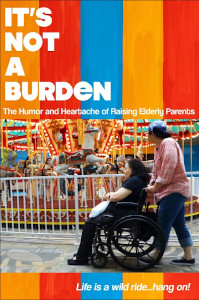 It’s Not A Burden poster

It’s Not A Burden The Humor and Heartache of Raising Elderly Parents, a new 90-minute documentary from Michelle Boyaner and Greenie Films spotlights the issues faced by the adult children of several elderly people. Some of them are living in assisted living facilities, some with dementia and or debilitating health conditions; some had passed away by the time the film was made. Boyaner and her mother feature prominently, often in video taken in the car. The emotionally charged 2020 film features candid conversations with the adult caregivers and their parents in several locations in California as well as Arizona, Georgia, Massachusetts and New Jersey. Scroll down to watch a short video introduction.

“Sometimes I pretend like she’s somebody else’s mother and that way I can be nicer to her,” Boyaner, who had been estranged from her mother until she made a promise to look after her to her sister, says in the documentary.

A bit later in the documentary one of the adult women who is her mother’s full-time caregiver asks, “Who’s going to take care of me?” when she gets old like her mother since she has no children. The producers found participants among their circle of friends and their friends. When asked about the goal of the documentary a spokesperson explained by phone that they hoped to remind viewers that when they look at their aged parents they remember who they were and that they are still those same people inside.

Made with the fiscal support of The Film Collaborative and Kickstarter funding. The film was written, directed and produced by Emmy®-nominated filmmaker Boyaner (Packed in a Trunk: The Lost Art of Edith Lake Wilkinson). Barbara Green (A Finished Life: The Goodbye and No Regrets Tour) served as cinematographer, editor and producer. Katie Ford (Miss Congeniality) and Wendy Zipes Hunter (Voices of Parkland) were producers. The original score composed by Joanna Katcher (Nice Manners) featuring songs by Danielle Ate The Sandwich. Maxine Lapiduss, Aaron Lustig and Barb Held were executive producers.

Gravitas Ventures (North American), a Red Arrow Studios Company, will distribute the documentary due to be released on video on demand (VOD) in the United States June 1, 2021 on iTunes, Vudu, Google Play, and Vimeo.