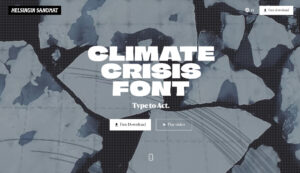 Helsingin Sanomat , “the biggest subscription-based newspaper in the Nordics,” dedicated several weeks of work spread over months to the development of The Climate Crisis Font designed to visualize the urgency for climate action. The new font is available for download free of charge at TypeToAct.com. Scroll down to watch an English language video.

“The font has been licensed with SIL Open Font licensing making it available for editorial, commercial, and private use,” said Tuomas Jääskeläinen, art director, Helsingin Sanomat, in response to questions through a communications intermediary via email.” The full terms of use are available at drive.google.com/file/d/19M8ebCT0JOLWln6LDkWQzj5gy-qmj9Ww/view. 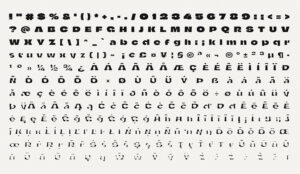 “The main limitation is that it needs to be kept freely available and free of charge,” he said. “The font is intended for anyone who wishes to make a point about the impact of climate change, be it the media, designers, artists, activists or anyone else.” He explained that “the font has been designed to work in all latin-based alphabets when it comes to e.g. diacritics. .

When asked other than drawing attention to climate action what makes the font special or distinctive he replied: “ I think it’s the fact that it’s based on actual data. We haven’t done a massive search, but I suspect it’s among the first data-based fonts in the world, if not the first. That, and the way the scalable OpenType technology lets the font align with the yearly data, is what makes it special for me.” 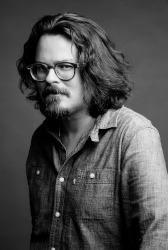 Regarding the budget or budget range for the creation of the font he said: “  Unfortunately I cannot disclose the budget, but it is a reasonable investment considering the scope of work needed.”