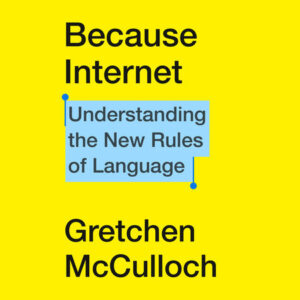 Ending a text with a period may make the writer seem old while an emoticon at the end of a sentence can add surprising nuance to the statement, according to a book about language published last year. The subtleties of informal written communication are many, says Gretchen McCulloch, a self described internet linguist. She believes modern digital communications are changing language and the way we and society overall communicate for the better. In Because Internet: Understanding the New Rules of Language (Riverhead Books, $26) she explains her views and theories.

Salutations like language in general evolve over time, according to the book. McCulloch explains that for many addressing someone with dear has become dated. At the same time hey, which for older generations is objectionable, has become a common written email greeting. Hi follows in popularity with hello being last and used to address strangers.

The author goes on to say that a generational gap exists; and some users embrace the “expressive capacity” of informal writing while others reject it. The author explains the difference between emoticons, emojis and gifs, pointing out that although there is no universal agreement on their appearance emojis are the best fit for many people communicating electronically. They make it possible for users to better express their mental states in written form, the author says. It’s useful to think of emojis as gestures; already courts have had to address the meaning of emojis such a raised hand, a possible gang sign or a comma, she says.

The 326-page hardcover book published in 2019 is divided into eight chapters: Informal Writing, Language and Society, Internet People, Typographical Tone of Voice, Emoji and Other Internet Gestures, How Conversations Change, Memes and Internet Culture and A New Metaphor. The emojis in the book are from Twemoji, an open source font released under a Creative Commons Attribution.

McCulloch, is based in Montreal, Canada and hosts the podcast Lingthusiasm, according to her bio.