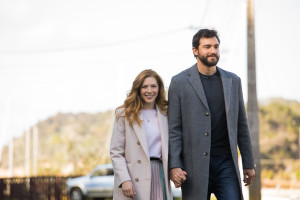 Rachelle Lefevre and Matt Whelan play Maggie and Tom Cabbott, a Canadian couple in The Sounds, a psychological thriller from Shaftesbury in Canada and South Pacific Pictures in New Zealand. When Tom disappears, dark secrets and family plots complicate matters for Maggie. The TV miniseries is available in the United States via Acorn TV, a commercial free subscription streaming service offering foreign programing. Scroll down to watch a video trailers.

In the eight episode miniseries the happily married Canadian couple start a new life and a new salmon fishery business in a small harbor town. What starts as a promising adventure for the couple seeking to escape Tom’s oppressive family quickly spirals into an unsettling story.

“It was made for Acorn TV and CBC and Sky TV NZ,” said Rachael Keereweer, head of Communications, South Pacific Pictures. “The primary target audience here in New Zealand was a relatively broad, 25-54 demo. From idea, the show was several years in the making. The actual production schedule, including pre-production was 6 1/2 months with a shoot period of 13 weeks from mid-August to late November 2019.”

The visually stunning background scenery in The Sounds is in New Zealand. The series was filmed in Whangaroa at the top of the North Island in an area called the Bay of Islands and in Auckland.

“It’s a mystical, magical, wonderful, beautiful place,” said Lefevre about the Malborough Sounds in a series press kit. And when asked about the most enjoyable aspect of working on The Sounds Whelan said, according to the same promotional materials, “Shooting up North in Whangaroa, I’d never been there before and spending a couple of weeks out on the water, on yachts and kayaking and doing all sorts of cool things in beautiful locations around New Zealand.”

The program was created and written by Sarah-Kate Lynch (Blessed Are the Cheesemakers, The House of Daughters). Other creative staff include Peter Stebbings, director, and executive producers Kelly Martin and Sally Campbell.

South Pacific Pictures, in operation for 32 years, has produced more than 5,600 hours of drama series and serials, feature films, reality programming and documentaries for New Zealand, Australian, Canadian and United Kingdom broadcasters, according to the company website.