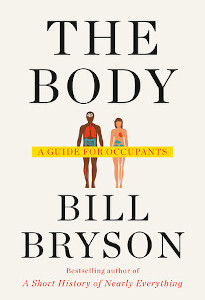 The Body A Guide for Occupants

In The Body A Guide for Occupants (Doubleday, $30) Bill Bryson, an American writer (born in Des Moines, Iowa) living in England, explores the human body. The 450-page hardcover book was published in 2019. Using some lesser known and unexpected tidbits he entertains readers with a curious and light exploration of some aspects of the human body, dispensing with gory descriptions. Often his discussion includes history and historic figures or quotes from authors, researchers and academics.

For example, in the chapter on Nerves and Pain he quotes Patrick Wall as a leading British neuroscientist and author of Pain: The Science of Suffering; and Oliver Sacks, who in a book on migraines described almost one hundred types of migraines. In The Outside: Skin and Hair chapter he quotes Peter Stark in Last Breath: Cautionary Tales from the Limits of Human Endurance, saying that a man who weighs 155 pounds has about 42 quarts of water in his body; and he will lose one and a half quarts of water a day via urination, sweat and respiration.

The hardcover book is divided into 23 chapters: How to Build a Human; The Outside: Skin and Hair; Microbial You; The Brain; The Head; Down the Hatch: The Mouth and Throat; The Heart and Blood; The Chemistry Department; In the Dissecting Room: The Skeleton; On the Move: Bipedalism and Exercise; Equilibrium; The Immune System; Deep Breath: The Lungs and Breathing; Food, Glorious Food; The Guts; Sleep; Into the Nether Regions; In the Beginning: Conception and Birth; Nerves and Pain; When Things Go Wrong: Diseases; When Things Go Very Wrong: Cancer; Medicine Good and Bad; and The End.

Bryson is author of 19 other books, including A Walk in the Woods, The Life and Times of the Thunderbolt Kid, and A Short History of Nearly Everything. He was chancellor of Durham University, England’s third oldest university, from 2005 to 2011, and is an honorary fellow of Britain’s Royal Society.

According to his FaceBook page he met his wife in England, where they settled; he wrote for The Times and The Independent before moving back to the United States with his wife and four children. He and his family moved back to England in 2003.

Click to buy The Body: A Guide for Occupants