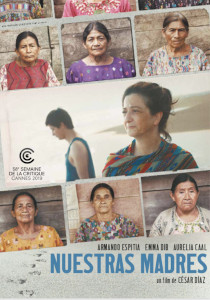 Nuestras Madres (Our Mothers), a 78-minute documentary style drama in Spanish with English subtitles from Outsider Pictures had its virtual theater release at 15 locations in the United States last week. The somber film was Winner Camera D’or, Cannes Film Festival and Belgian Entry to 92nd Academy Awards. Scroll down to watch a trailer.

It features Mexican actor Armando Espitia as Ernesto, a young anthropologist working for the Forensic Foundation in Guatemala in 2018 during the trial of the soldiers who sparked the civil war. Charged with identifying the bodies of the missing he has a personal mission. Emma Dib is Cristina, his mother.

The account of an older woman from a small village convinces Ernesto he has a promising clue to find his father, who went missing during the war. Although his mother and his boss urge him to leave well enough alone he presses forward.

César Díaz, director, heard from his mother about his father, also a “disappeared” guerrilla fighter. He began the project as a documentary about military massacres during the Guatemalan civil war in the 1970-80s. After meeting women in the villages where the fighting took place he turned it into a feature drama. According to promotional materials, their testimonies, often full of violent tales, reveal the story of Guatemala’s history as one of the first Central Intelligence Agency “Black Operations.”

“In Guatemala, fathers are absent as a general rule,” Díaz said in a press release (he was not available for a podcast interview). “Many children born of rape think that their father just left at some point. I therefore wanted the mother to reveal her secret, because it is a way of accepting and living with the consequences of what has happened. In a post-dictatorship, post-war situation, I think there must be collective acceptance, which can then be followed by individual moving on. Nuestras Madres is, to my knowledge, the first film to deal with this subject head-on.”

According to press materials for the film only 1 percent of the disappeared have been identified after over 20 years of searches. The genocide trial in the film is a mixture of many trials taking place, as is the uncovering of mass graves and returning the bodies to the families.

The film was made with the support of Centre du Cinéma et de l’Audiovisuel de la Fédération Wallonie Bruxelles Proximus Eurimages. Born in Guatemala in 1978 Díaz studied in Mexico and Belgium. He attended a  screenwriting workshop at La Fémis (Ecole Nationale Supérieure des Métiers de l’Image et du Son, the FEMIS Film School) in Paris, France. He has been a fiction and documentary film editor for more than a decade. He directed the short documentary films Semillas de Cenizas screened in twenty international film festivals. Nuestras Madres is his first feature film.

Beginning May 1, 2020 Our Mothers became available nationally via local art house cinemas for $12 per ticket, split equally with the local cinema to help support them during the pandemic. As of this writing the theaters are: in California: Los Angeles at Laemmle Theaters, Davis at Varsity Theater, Larkspur at The Lark, Santa Ana at The Frida Cinema, San Diego at Digital Gym Cinema; in Denver, Colorado at SIE Film Center; in Florida: Fort Lauderdale/Hollywood at Fort Lauderdale International Film Festival, in Miami at Tower, in Tampa at Tampa Theater; in Michigan: Detroit at Cinema Lamont, Ann Arbor at Michigan Theater; in St Louis, Missouri at Webster University Film Series; Albuquerque, New Mexico at The Guild Cinema; in Buffalo New York at North Park Theater; in Cleveland, Ohio at Cleveland Cinematheque; and in Philadelphia, Pennsylvania at Cinespeak.