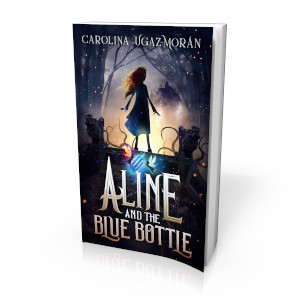 Aline and the Blue Bottle

Carolina Ugaz-Moran, a native of Spain raised in South America and the United States with degrees in biochemistry and creative writing from the University of Wisconsin, spent ten months spread over 15 years writing Aline and the Blue Bottle, her first book. The 303-page softcover book published in 2019 includes Spanish and Quechua words, a map at the beginning as well as a page of Spells and a glossary at the end. Her target audience? Children eight to twelve years old and older.

“The cover depicts Aline standing on the House of Haunted Gargoyles facing her future, a magical floating castle with mysterious creatures flying around,” the author said by email when asked about the cover art. “She is at the entrance of a forest, with vines that surround her and behind her are her two loyal and close magical friends carrying the blue bottle. The cover also holds secrets (just like within the book).”

She went on to explain, “The title highlights Aline, her adventure, and her first quest to find the blue bottle and save many worlds. It also shows strength, courage,passion, and empowerment – in this case for a girl, depicting mysteries and magic which Aline and her friends will have to face together.” 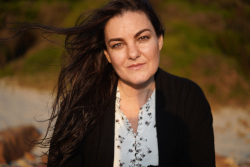 When asked why she included Quechua she said, “I think the more exposed we are to languages as children, the more neurons we connect and the better we can develop the ability to become multilingual, so why not add Quechua and Spanish! But for me, it is more than learning a new language, it is about understanding a culture and exposing oneself to the abundance fountain of knowledge that each language provides.

Also, a few years ago, I found out that even though several people can speak Quechua (8-10 million people) very few people can actually read and write it due to the lack of printed material in Quechua. There have been efforts from the Peruvian, Ecuadorian, and Bolivian governments to introduce the language as an intercultural bilingual education; however, some indigenous people in each of these countries are having their children study in Spanish for the purpose of social and economical advancement. I thought I tried to help out a little plus I can learn on the way. Fun fact: there are about 45 varieties of Quechua which are all classified as separate languages and in addition, there are several dialects.”

When asked if her biochemistry studies help her or play a role in the project she said, “Yes, as well as my love for science and nature. This can be seen in several places. The chimera twins. They are powerful sylph sisters who have an important role in the book series. A chimera is a single organism that contains two sets of DNA with the code to make two separate organism. Simply put, it is an organism made up of cells from two or more different individuals.

The explanation of magic and how it flows, it somewhat reflects the states of energy as well as the law of conservation of energy. The blue and red stars and how from earth, the cooler stars appear red, and the high temperature stars appear blue. The symbiotic relationship between sharks and remora fish, I am an animal lover and I am looking for ways for people to admire and be kind to even the scariest of animals.”

She is working on the second book in the Aline series. It will be called Aline and the Kron Queen. 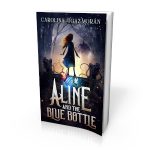