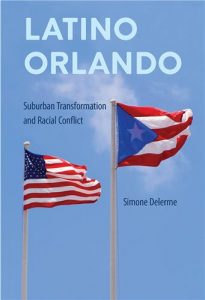 “The intended academic audience includes undergraduate students and scholars in the disciplines of Anthropology, Sociology, Latino Studies, American Studies, Southern Studies, and Florida Studies,” she said by email. “The book is concise and intentionally written in simple enough language to be adopted by introductory undergraduate courses in all of these disciplines, but the engagement with critical race theory will appeal to more theoretically driven, advanced audiences.”

The most significant finding or takeaway from the book? “Latino migrants are complicating racial categorizations and challenging the deep-rooted black-white binary that has long prevailed in the American South. Language and the changing soundscape became a way of racializing and segregating Latino communities, leading to the growth of suburban ethnic enclaves,” she said.

“The research was conducted in the counties that are referred to as Greater Orlando or the Orlando Metropolitan Statistical Area,” she said when asked about the title. “Therefore, I wanted to include the term ‘Orlando’ in the title so audiences knew the part of the south that I focus on. The population I focus on is primarily Puerto Rican, but does include the voices of other Latinos. Therefore, the term ‘Latino’ was more inclusive and representative of the population documented in the book.”

When asked about the term Latino or Hispanic she said, “In the book, I use the terms Latino and Hispanic interchangeably, although there is a difference. Most of my informants and interviewees preferred to be identified as ‘Mexican,’ ‘Venezuelan,’ or ‘Colombian,’ for example. When they did use one of the umbrella ethnic terms, the preference was actually Hispanic, not Latino. It really depended on the individual’s preferences though, which is why I use both terms. I try to use the language that my interviewees and informants use to describe themselves. The term Puerto Rican is also tricky because those from the diaspora are sometimes identified and perceived as Nuyorican, and there is a distinction made between those from the island of Puerto Rico and those that were born and raised in New York City, for example. I use the term Puerto Rican if my interviewees and informants identified that way. Usually those who were born on the island of Puerto Rico or have family from Puerto Rico identified as Puerto Rican.” 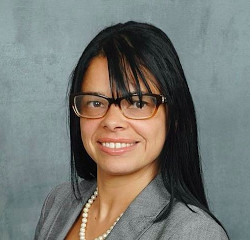 “The term Hispanic, which the United States Census Bureau created in the 1970s, refers to all people in the United States whose ancestry is from one or more Spanish-speaking countries,” she said to explain how she distinguished Hispanic from Latino in the book. “The term thus emphasizes language, not geographic origin, as the identifying factor. The term Latino, which originated within the community, instead focuses on geography and is ‘an attempt to embrace all Latin American nationalities, including those which neither have ties to Spain nor are necessarily Spanish-dominant groups,’ such as Brazilians and various indigenous groups living in Latin America.”

Delerme specializes in migration to the United States South, with interests in race relations, integration and incorporation, community development, and social class inequalities. The book cover is based on a photograph Delerme took of a house in the Buenaventura Lakes suburb that had an American flag and Puerto Rican flag flying in the front lawn. She is conducting fieldwork for a second book, International Memphis: Migration and Transformation in the Mid-South. She is researching “how migrants are being incorporated into the social, political, and economic life of Memphis, Tennessee, a city with a history of segregation and a historic black-white racial binary.”

From idea to publication the project required 10 years. She received an in-residence fellowship from the Center for Puerto Rican Studies at City University of New York (CUNY) Hunter College after she completed her data collection. She is also Truman Scholar, which includes a financial award, which facilitated the fieldwork and data collection for the book. None of the informants or interviewees mentioned in the book was compensated financially, she said.

The book is part of the Southern Dissent series, which seeks to explore and analyze the role of dissent in the south, and document the experiences of dissenting groups during different time periods and in different places.