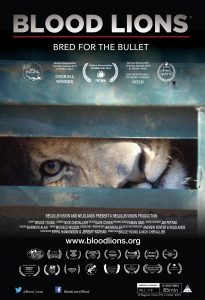 There may be as many as 12,000 lions in 350 breeding farms in South Africa living a desperately sad existence, according to Pippa Hankinson. She became appalled at the conditions of the captive lions in a remote breeding farm she visited in South Africa in 2011. After researching the subject at length and finding there were many similar farms she set out to share her discovery with the world. Four years later Blood Lions, an 84-minute feature documentary became available internationally. Scroll down to see a trailer.

“After over a year of intensive research, it was apparent that very few people were aware of the full extent of the industry – neither abroad nor in South Africa,” Hankinson, producer, Blood Lions, said by email when asked about the film*. “I felt strongly that the world needed to know, and decided that a film would be the most expedient way to create global awareness around what I saw as being complete exploitation.”

About the target audience for the film she said, “Widely speaking, the target audience for Blood Lions is the general public – particularly the youth – around the world. More specifically we aim to educate the travel industry i.e. tour operators sending clients to South Africa, as well as to empower tourists and young volunteers to encourage them to make responsible and ethical choices when visiting this country.  And lastly we invite all those in positions of influence around the world to watch the film, and to help elicit policy change which will ensure the protection of all predators (and indeed all our wildlife) from cruelty, exploitation and commercial practices which are harmful and disrespectful, and which create ‘markets’ for the abusive and unethical use of our wildlife.”

The goal? “Blood Lions was produced to shine a light on the insidious practices of predator breeding and canned lion hunting in South Africa, as well as associated activities such as interactive tourism and the lion bone trade to SE (south east) Asia. Our aim was to reach as broad an international audience as possible in order to build global awareness and knowledge around the industry. It was – and still is – a ‘call to action,’ not only to effect behavioural change around how we treat our wildlife, but also to precipitate change in policy through garnering support from the world’s most influential individuals and organizations. Ultimately, we hope to see an end to captive predator breeding.”

When asked how easy filming was she said, “Our main challenge when filming Blood Lions was to appear as ‘amateur’ as possible, whilst at the same time securing HD (high definition) quality documentary video footage, so our filming/production approach was to be as low key as possible. This meant only one camera person – using highly mobile camera/audio equipment – who often posed as a tourist. A ‘spy camera’ was used to capture certain scenes where a conventional camera might have aroused suspicion. The use of a stills camera that was also able to shoot video, was also very useful in keeping a low profile. Another critical component of the film was the challenge of obtaining imagery from volunteers or staff who working on the captive lion breeding farms, who had the ability to get unique access to ‘behind the scenes’ animal and human behaviour.  Suspicious predator breeding and hunting farm operators made life very difficult for us when they tipped off their colleagues that  ‘greeny’ photo journalists were asking questions and capturing images on their properties. Some of the farms were therefore expecting us, and after a lot of threats, demanded that we leave the premises immediately we arrived. It was on these occasions that our hidden camera paid off. When we visited the hunting farm, our team posed as a private small film crew who were following an American client to make his own personalised African hunting safari video. This worked until such time that canned lion hunting operators once again became suspicious, and went so far as threatening to ‘kill us’ which forced our camera team to immediately leave their fenced hunting farm.” 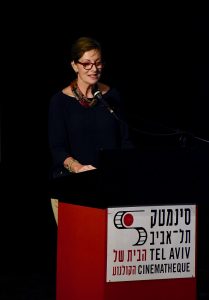 Many farm raised captive animals are hunted. When asked why she focused on lions the film producer said, “As you say, many farms raise captive animals to be hunted, but there is a ‘double-edged sword’ to the breeding of predators as they are not only bred to be hunted, but for their bones to be exported to supplement the ‘tiger bone trade’ in SE Asia. No other wild animals are hand-raised and bottle fed…simply for the bullet. Furthermore, most internationally recognised lion ecologists agree that the captive lion breeding industry has no conservation value whatsoever. Although captive hunting statistics have decreased, the demand for lion bones from Asia has increased dramatically over the last few years, leading to fears that this demand will inevitably put pressure on wild populations, as poaching increases and the illegal trade and trafficking intensifies.

Although my passion for wildlife extends to all animals, it seemed incomprehensible to me that these magnificent, iconic predators should be exploited in such a way. Lions are a keystone species at the top of the food chain, and they play a critical role in our ecosystem. There is no doubt in my mind that they are wild creatures, and that all wild species should be allowed to live out their lives in their natural habitat, and not forced into captivity to be mass bred for commercial purposes. To lion breeders in South Africa they are seen simply as commodities to be used to generate a lucrative income through interactive tourism and volunteering, trophy hunting and the sale of their body parts. It is now estimated that there are between 8,000 and 12,000 predators currently being held captive in over 350 breeding facilities across South Africa… very similar to ‘puppy mills’ in the USA. They lead heartbreaking lives and the cycle never ends.

Lion cubs born in captivity in South Africa are removed from their mothers within the first week of birth, and are passed off as ‘orphans’ or ‘rescues’. This practice of removing the cubs forces the females into intensive breeding cycles where lionesses produce up to five times more litters of cubs than they would in the wild. These tiny cubs are bottle fed, petted and hand-reared by paying tourists and volunteers who are led to believe that they are supporting authentic conservation projects which will rehabilitate these predators back into the wild. Nothing could be further from the truth. When the cubs grow too old for ‘pay and play’ activities, many are moved to facilities that offer ‘walking with lions’ tourist attractions. These sub-adult lions are often sedated, and trained in the same way as circus animals, to climb trees and pose for ‘selfies’ with paying tourists: facebook.com/BloodLionsOfficial/videos/1039594396154923/

Once these lions are considered too dangerous to be in contact with humans, some are sent to canned (captive) hunting facilities where they are shot in confined enclosures by trophy hunters. Others are sold to zoos or traders as breeding stock for new facilities, or private collections around the world. Completing the cycle of exploitation, lions that are not used for the above purposes are euthanized or slaughtered for their body parts to be exported to Asia to supplement the ‘tiger bone trade.’ The skeletons are utilised for medicinal and aphrodisiacal purposes in the production of what is called ‘tiger wine’ and ‘tiger cake,’ and also for use in ‘tiger bone jewellery’: facebook.com/BloodLionsOfficial/videos/1062460323868330/.  This trade is also extremely worrying from a welfare perspective, as animals shot for their trophies in canned hunts are required to be in a reasonably good condition, whereas lions bred for the bone trade are bred intensively with little or no consideration towards their health or welfare: facebook.com/BloodLionsOfficial/videos/1447633032017722/”

In 2015, Blood Lions premiered at the Durban International Film Festival in South Africa. Engagements with MSNBC and Discovery International followed. The film has appeared in 180 countries and territories around the world. It was screened at 17 international film festivals and hosted by the Blood Lions team in 25 countries. In the United States Blood Lions is available online at the PBS shop, Amazon, Ecostreamz and the Wildlife Conservation Channel.