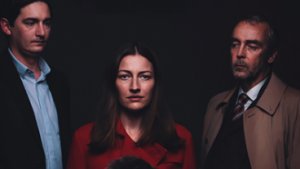 The Victim, a Scottish thriller

KCET, a Southern California public station, will premiere Austrian, French and Scottish programming this month. The Victim, a four-part Scottish thriller series, Resistance, a French World War II series, and Vienna Blood, an Austrian mystery series will air locally beginning in January. After their on air premier the programs will be available on the station website. Scroll down to watch trailers.

The Victim first aired in the United Kingdom on BBC One April 2019. The engaging and thought provoking thriller explores age old issues of whether the punishment fits the crime as well as the new ethics of individual responsibility for posts on social media. It stars Kelly Macdonald (Boardwalk Empire, No Country for Old Men) as Anna Dean who is accused of leaking her son’s suspected murderer’s identity online and conspiring to have him killed. John Hannah (Four Weddings and a Funeral, Agents of S.H.I.E.L.D.) plays Craig Myers, a hard working family man seeking prove his innocence.

Resistance, based on true events, (in French with English subtitles) portrays the story of “a group of young French heroes fighting for freedom from German Nazi occupation in World War II” who join forces to produce a newspaper. According to a press release, the program is part of Walter Presents, a curated collection of award-winning international dramas hand-picked by Walter Iuzzolino, “a TV connoisseur who has scoured the globe for compelling hits.”

In Vienna Blood, reminiscent of Sherlock Holmes with some elements of romance, a student of medicine and Sigmund Freud and an Austrian detective team up to solve murder cases in early 1900s Vienna. It features Matthew Beard (The Imitation Game) and Juergen Maurer (Vorstadtweiber).  The final four episodes were my favorites.

According to promotional materials, KCET offers cultural and educational programs in Southern and Central California, including local programming and television programs from around the world. Throughout its 54-year history, KCET has won hundreds of major awards.