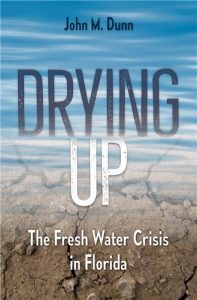 Florida is approaching a crisis. The peninsula surrounded by water on three sides and with more coastal miles than any continental state save Alaska may not have enough water to serve the needs of existing residents, new residents and tens of millions of visitors in the coming years. While water issues are not new they have grown worse, according to John Dunn, author of Drying Up: The Fresh Water Crisis in Florida (University Press of Florida, $24.95).

Drawing on more than one hundred interviews and years of research he points out that pollution, failing infrastructure, increasing outbreaks of toxic algae blooms, and pharmaceutical contamination are worsening water quality. Climate change, sea level rise, and groundwater pumping are spoiling freshwater resources with saltwater intrusion. Shortages have prompted fights over rights to the Apalachicola River, Lake Okeechobee, and the Everglades among other important watersheds.

Population growth is accelerating a difficult situation, he says. In the not too distant future water scarcity may force municipalities to offer residents toilet-to-table “reused water.” In the book, he outlines the history of water in the Sunshine State and some of the most salient fresh water concerns.

“I am a native Floridian, veteran freelance writer, teacher, and environmental activist,” the author replied by email when asked what prompted him to write the book now. “With these perspectives it hasn’t been hard for me to detect the degradation of our water resources over the years. They aren’t new. They are only growing worse. A friend of mine Cynthia Barnett, a former staffer with Florida Trend Magazine, caught the attention of many Floridans about a decade ago with her book, Mirage. Unfortunately, there has been little improvement addressing our water issues.

I originally queried the editorial staff of the University Press of Florida (UPF), wanting to write a Florida-specific book on climate change. UPF already had such a book in production. But the editor asked me if I’d like to write a different one on Florida’s water woes instead. I’d written on water issues for magazines in the past. In addition, I’d worked with various conservation groups. So, I had a background in water issues and experience which I could draw on. I submitted up a book outline and got a contract.”

From idea to publication the hardcover book took Dunn two and a half years to complete. He wrote for general readers, relying on a magazine style of writing to make it reader friendly. The book struck a cord because he has received many invitations for book presentations across the state, including the Miami Book Fair this month.

“During the Q&A at these presentations, I’ve noticed that many people, especially those that have recently moved here, are either surprised or shocked to realize how impaired our waters are,” he said.

How soon should we expect the toilet-to-table water stage in Florida? “Experts told me it will be at least a decade from now, if that soon, before many Floridians are able to get over the ‘yuk’ factor associated with drinking recycled or ‘reuse’ water. One way of reusing waste water is the indirect method. This is the what many people in Tampa would like to explore; that is, pumping treated wastewater deep into the ground beneath the ‘shallower aquifer’ (from which we extract drinking water). There, presumably, the sunken, treated water will mix with existing ground water and get an extra dose of filtration as it moves through the subterranean world before it is extracted topside as drinking water.

The other method is to treat wastewater with advanced methods and then pipe it directly to a facility where it is blended with the utility’s water supply. Astronauts use this method in outer space when they treat and recycle their own urine. The people of Singapore, facing critical water shortages, now drink this direct potable ‘reuse’ water, which they call NEWater.” 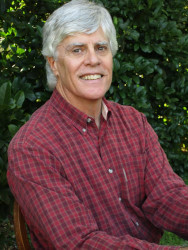 When asked what he would like to accomplish from writing the book he said, “I hope my book provides a ‘primer’ for readers which will give them the confidence to become citizen water activists. Anyone contemplating a move here, especially those hoping to do business in the state, should investigate both the availability and reliability of water supplies.They also need to evaluate the impact their own possible arrival could make on Florida water. Americans are used to thinking about their ‘Carbon Footprint.’ Increasingly here in Florida and the world, people are realizing they must also now calculate their ‘Water Footprint.’

As I’ve explained in Drying Up, Central Florida is already drawing water faster from the ground than it is being recharged by rainfall. South Florida is not far behind in being in the same situation.”

What can Florida residents do to secure clean water in the coming decade? “The biggest problem to Florida’s water supply is our growing population, along with public indifference and the current ‘business as usual’ approach to economic activity,” the author said. “For too long, the Florida Growth Machine, developers, bankers, realtors, and their compliant political allies, have viewed Florida as a commodity, a place to be consumed for a profit. Currently, the Miam/Dade (Miami/Dade) County Commission is paving the way for construction of the largest mall in the country. The $4 billion retail and entertainment complex will be built on the edge of the Everglades. It will even provide artificial snow so shoppers can ski. This, in a subtropical setting that will face water shortages in the near future! Such insanity runs rampant in our state.

In my lifetime, I’ve seen Florida’s population jump from 2 million to 22 million. We now receive over 120 million tourists annually. The 1000 Friends of Florida 2017 study suggests that if present demographic trends continue, Florida could add another 15 million by 2070. By then, much of the state is likely to be swamped by sea level rise.

Floridians who worry about securing fresh water need to be mindful of the plight of their water supply right now. It’s amazing to me that the nation gets excited about spending billions of dollars looking for a drop of water on Mars or the moons of Saturn with the hope it could suggest the existence life, while simultaneously wasting fresh water on earth with abandon.

All of us are guilty of squandering water. Floridians use 50 percent of the state’s fresh water supply irrigating their lawns every day. Every time we flush a toilet and fertilize our yards we contribute to the ‘nutrient’ contamination of fresh water by fueling algae growth. Every time we soak our lawns with pesticides, we pollute groundwater. Every time we clear-cut Florida’s forests, wetlands, and natural vegetation, or dig canals, change the contour of the earth, and plaster the ground with asphalt and concrete, we cause the greatest damage of all to our fresh water supplies. That’s because we destroy Florida’s natural hydrologic systems. When we do this, we literally disrupt the natural evaporation, drainage and percolation of water to the aquifer.

Finally, I think, Floridians need to adopt a more enlightened ‘Soft Path’ approach to water which I’ve described in the book. These means restoring wetlands and natural hydrologic systems, mimicking nature, and increasing the use of conservation and recycling. It calls for the water management districts to stop giving out new water pumping permits like library cards. It also means a shift in values. Water shouldn’t be a commodity. It is, after all, the unique, perhaps, divine substance that gives rise to life on earth.

Floridians must elect only those who also understand the natural world and will fight to protect our natural resources, not exploit them. Otherwise, developers, big business, fracking interests, and large-scale agriculture operations (ranging from the growing of sugar cane to raising cattle), will be the main water policy makers.

I hope my book will help bring about these goals.”

Dunn, a native of Miami, is a working freelance writer and journalist and a veteran high school history teacher. He has published over 350 articles for more than twenty periodicals as well as young adult books. A member of the Silver Springs Alliance, Dunn has worked for years with other volunteers to address many of Florida’s pressing environmental problems. He lives with his wife Susan in Ocala, Florida.