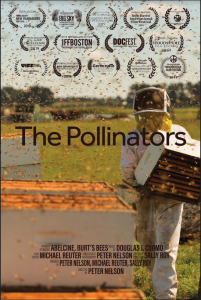 Cinematographer Peter Nelson dedicated countless hours to filming bees, traveling to 14 states, following bee managers and their bees; and interviewing 26 people in the making of The Pollinators, a 92-minute film about bees and their role in agriculture today. Its festival premiere was at the Big Sky Documentary Film Festival. To date it has been screened at 18 festivals. He has already taken home seven festival awards. Scroll down to watch a trailer for The Pollinators*.

When asked by email what prompted him to make a film now he said, “I am a backyard beekeeper for over 30 years now and also a cinematographer by profession. I also have a great interest in food and agriculture and felt the story of migratory beekeepers and our dependence upon managed honey bees was not well known I was compelled to tell this story due to a collisions of all these passions.

Losses among commercial beekeepers are very high and range from 30 to 50 percent or more. This is not sustainable long term and this matters to all of us because us our dependence upon the managed bees for so much of our food. One of every three bites is something pollinated by a bee, so this is really important if you like to eat. We are in a time of peril for the bees (and also many other insects) and I wanted to take a look at this and tell this story.”

The target audience? Beekeepers, of course as well as people interested in the environment, farming, foodies and gardeners. The film includes bee close ups and beautiful images of the insects in flight as well as disturbing shots of thousands of dead bees. 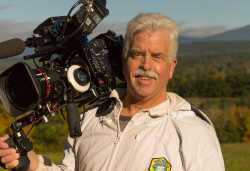 “Filming bees was a challenge, but also a lot of fun,” the filmmaker said. “I wanted to try and show bees in a way I had not really seen before as the wonderful beautiful insects they are. Many people are afraid of bees and I understand that as they are a stinging insect. Unlike yellow jackets, honey bees will sting only as a last resort and they die in the process so honey bees are not aggressive for the most part. Honey bees are also incredibly beautiful and complex creatures and I wanted to try and show bees to audiences in a new way and share how wonderful and graceful honey bees really are. I used a lot of very high speed photography (up to 1560 frames per second) to show bees in super slow motion flying, taking off, landing and just being beautiful in their natural environment.

Bees fly really fast and so are very challenging to film, especially in macro close up. My experience as a beekeeper for many years, gave me an advantage with this by understanding a bit about bee behaviors and the way they fly, land and their rhythms to some extent. It also required a lot of patience and a steady hand to keep the bees in focus at such shallow depth of fields.

I used Vision Research Phantom cameras and macro lenses provided by AbelCine for the ultra slow motion. The specialty cameras were provided by AbelCine as part of a grant for this project. My main camera was a Canon c300 Mk II and a 17-120 cinema zoom which I own and also some prime lenses for night. I also cannibalized one of my backyard bee hives to be able to stick a lens right inside the hive for a unique view of the bees inside their homes.”

Regarding funding and support he said, “We have a tremendous amount of sweat equity and some personal funding in the film. Being a cinematographer, I could go shoot pretty much as I needed to so was able to respond quickly to developments and shoot as needed. We also had some early financial support from Burt’s Bees, The Schumann Media Center helped us with funding. We also won a Doc Pitch competition from the Paley Center.

AbelCine gave us an ‘in-kind’ grant towards specialty camera equipment and lenses. Michael Reuter, the editor, producer and co-owner of EditBar helped us tremendously in post production right through completion.”

The only people who were paid were crew members for their services, he said, and no one who appears in the film was compensated in any way for his or her appearance nor was anyone paid for access.

“I wanted to bring this important story to audiences, to try and connect people to their food, where it comes from and a bit of what is involved in growing it,” he said when asked what he hoped to accomplish. “I also wanted to raise awareness and try to explain some of the causes of pollinator decline.  If we can connect dots for people about the role of pollinators to our food system in some way, I would consider that a success.”

The producers were Sally Roy, Peter Nelson and Michael Reuter. Nelson was director of photography. At the time of this writing the project leaders were starting a theatrical release through Demand.Film, a crowd sourced distribution platform designed to make films available to cinemas across the United States, Canada, Australia, New Zealand, United Kingdom, Ireland and Germany over the next months. The goal is for the film to screen in one day events across the country in many places that would not likely screen independent documentaries. A national day of screenings is planned for Nov 6, 2019 in the United States (more at //us.demand.film/the-pollinators/). Broadcast, streaming, video on demand (VOD) and educational distribution venues have not been determined yet.