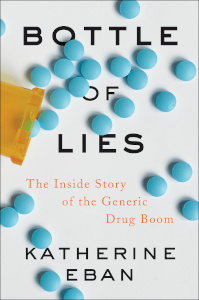 Investigative journalist Katherine Eban dedicated 10 years of her life to researching and writing about the generic drug industry boom in the United States. Along the way she read official documents, spoke with whistleblowers, lawyers and government employees, uncovering disturbing truths about the quality and trustworthiness of the drugs that many would prefer remain in the dark. This year her findings became available to the public in Bottle of Lies The Inside Story of the Generic Drug Boom (Ecco, $28.99). There is also an audio edition narrated by Eban. A paperback edition is due May 2020.

The 482-page non fiction book is easy to read and engaging, more like a novel than a non-fiction expose. It outlines the events that led to the blossoming of a huge generic drug industry in the United States and the myriad problems she uncovered. It is divided into 28 chapters and seven main parts: Shifting Ground, India Rises, A Cat-and-Mouse Business, Making A Case, Detectives in the Dark, The Watershed, and Reckonings.

“The book is entirely non-fiction, Eban said by email. “Every detail in the book is supported by documentation, interviews, or source recollections, and no names have been changed.”

When asked about her personal motivator, she replied, “My reporting on the generic drug industry actually began a decade ago, when I was contacted by the host of an NPR radio show, The People’s Pharmacy. The host, Joe Graedon, said that patients were contacting him with complaints about side effects from their generic drugs. He suggested I look into the question of what is wrong with the drugs. It quickly became apparent to me that just documenting patient concerns would not get me very far in answering that question. I realized the answers most likely lay in the manufacturing plants and boardrooms of the companies making our drugs – which meant in India and China.

My effort to answer that original question — What is wrong with the drugs? — turned into a global mystery that kept me reporting and digging.” 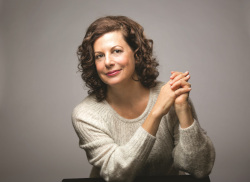 The primary target audience for the book? “Anyone and everyone, the author said. “The story is real-life global thriller with big money and life-and-death consequences at its core.  Anyone who enjoys a page-turning detective story, who wants to learn about the dark side of globalization, or who takes any medicine at all, is the ideal reader.”

About the book project overall the author said, “The biggest challenge was: how was I, as an independent U.S.-based journalist — without a newsroom, a team of colleagues, or other resources at my disposal — going to be able to penetrate an industry, and companies, that were based on another continent?  The difficulties of a global investigative project were unrelenting.

The most rewarding was finally being able to get real insight into those distant manufacturing plants, and to convey that to readers. The reaction has been immense. I am flooded with emails from grateful readers, almost all of whom are consumers of generic drugs. They feel enlightened by the book.”

Eban said that since the book came out, she has been contacted by Congressional committees, interested in investigating the problems she raised. One measure of success, the author said, would be to help fix the problems her book exposes.