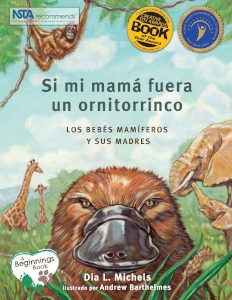 Seventeen years after the publication of If My Mom Were a Platypus Science Naturally published a Spanish translation of the children’s book. Si mi mama fuera ornitorrinco (Science Naturally, $12.95), the 64-page softcover title written by Dia L. Michels, translated by The Spanish Group and illustrated by Andrew Barthelmes is filled with color illustrations and journal style sketches of animal babies and their families on most pages. 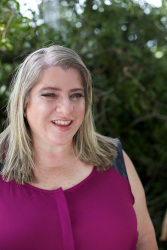 “The inspiration for the book came out of pregnancy misery,” said Michels when asked how the book came about. “I was so excited about being pregnant and becoming a mother – but my joy was soon mollified by round-the-clock morning sickness, frightening nightmares, and general wretchedness. I started researching other mammals to see who did pregnancy better than humans. Long story short, I decided that, for the purposes of pregnancy and breastfeeding, nothing could be better than being a platypus. The only way I could survive being pregnant was to could channel my inner-platypus. This desire to know how other mammals reproduced continued past the birth of my daughter, and pretty soon, I knew enough about mammal birth and breastfeeding to create a book. Many years of research went into parsing down which mammals to include. All it all, it took about a dozen years from idea to publication.”

She explained the book is used most frequently in a classroom setting, suggesting it might make a good addition to a home library for nature-minded children or gift for mothers with new babies. It works well as a read aloud option for children ages six to eight and as an independent reading reference text for ages eight to twelve and above. The publisher released free downloadable Teacher’s Guides, with hands-on activities, in English and Spanish. 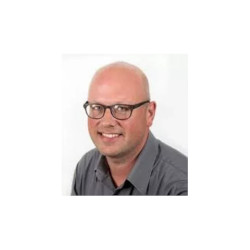 “I love learning about patterns and oddities in the mammal world, from hippos being the only mammal whose eyesight is just as good above water as below, to lions being among the only mammals that will wet nurse,” Michels said regarding the weirdes random fact about the mammals in the book. “My favorite random fact is that hooded seals, who spend their lives swimming in arctic waters, will only breed, whelp, and breastfeed on land. Why is that weird? They live where there is no land. The only way the species can survive is by procreating on sea ice—and hoping it doesn’t melt before they’re done!” 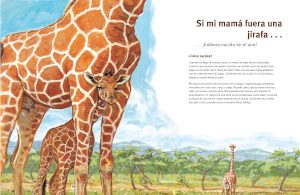 An inside page from the book

When asked how they are promoting the title Michels replied, “We are promoting this title at bilingual education conferences, parenting events, and STEM symposiums nationwide. We’ve also circulated a digital press release, advertised directly to our previous Spanish/bilingual customers, and reached out to those who bought the English edition of the book. We also sent an extensive pre-release mailing to libraries, media, and medical professionals. Additionally, we’ve partnered with literacy organizations, including First Book, to make the title available to students in Title I schools at a highly discounted price.”

The title reveals how fourteen mammals navigate the path from helpless infants to mature adults. It was designed for readers ages 10 to 14 and younger Read-Aloud listeners. The seals along the top of cover represent some of the awards it has won. The “NSTA Recommends” designation means it was endorsed by the National Science Teacher’s Association. The yellow seal is an award from Creative Child Magazine, a national publication for parents. The book was chosen by a panel of parents and educators for the Book of the Year award. The blue award is a Young Voices Foundation Seal of Approval, which honors books that inspire, mentor, and/or educate readers of all ages.