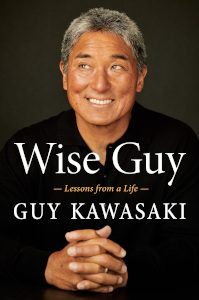 In his newest title Guy Kawasaki, author of 14 books, shares the insights he has learned over his lifetime. Wise Guy Lessons from a Life (Portfolio, Penguin, $28), a 246-page hardcover book, was published this year. It is divided into 11 chapters and begins with the emigration of the author’s grandparents to Hawaii.

When asked how long the project took to complete he replied by email, “It depends on how you want to look at it. From the time I decided to write the book until it was on the shelf was about eighteen months, but it took me sixty-four years to accumulate the wisdom to write the book. So the answer is between eighteen months and sixty four years.” And to a question about the audience for the book, he replied, “The primary audience is anyone with $20.”

“My publisher used the traditional methods of PR, ad buys, distribution through a salesforce, and social media,” the author replied to a question about promotion. “I used social media to recruit testers and reviewers; I spoke about it anywhere that I could; and I tapped my relationships with influencers. In general, we left very few stones unturned.”

The book is written in chronological and topical order. Kawasaki explains at the beginning of the book that he believes wisdom isn’t linear or quick. Each chapter includes a story and a section of what the author considers the lesson or wisdom to be gained. It is easy to identify as it is marked with a shaka or Hawaiian surfing hand symbol.

“My main goal was to empower people by telling them stories and then explaining the significance and wisdom underlying each story,” he replied when asked why he wrote the book. “This is not to say that every story in the book is a success story. I discuss many of my mistakes because they are highly educational. I hope, at least, that people will make different mistakes than the ones I made.”

When asked whether people can learn from anyone’s experiences he replied, “People can absolutely learn from the experiences of others. Otherwise 90 percent of books are a waste of trees and time. Are those people saying that they can’t learn that they should wear seat belts without being in a car accident?”

When asked if he is planning another book he replied, “I’ve written fifteen books. When I finished the first one, I told myself that I didn’t have any more books in me. I’ve now done that fifteen times. I don’t find topics. Topics find me. When the next topic finds me, I’ll write it.”

Click to buy Wise Guy: Lessons from a Life