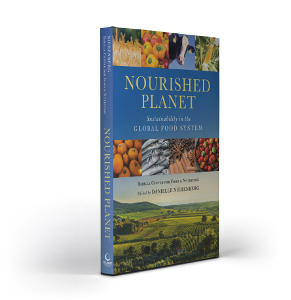 About 40 percent of the land in the world is used for agriculture and livestock; at the same time in the past 40 years 30 percent of the arable land has become unproductive; and soil erosion and soil degradation are widespread, according to Nourished Planet: Sustainability in the Global Food System Voices from the New Food Movement (Island Press, $25), a newly published book.

Convinced everyone has a right to food and the world needs a food and agriculture system that nourishes all sixteen people contributed their insights to the book “to show what’s working on the ground to alleviate hunger and poverty, prevent food loss and food waste, cultivate the next generation of leaders, and create more equity and social justice in the food system.” From conception to publication the book, edited by Danielle Nierenberg, required a year.

When asked who is the target audience Nierenberg replied by email, “All of us. The more than 7 billion eaters who inhabit the planet. However, we hope that academics and students will take special interest–it’s an easy to read, engaging book, full of hopeful examples of successful projects that can be replicated and scaled up and out in rich and poor countries alike.”

The 250-page softcover book with many graphics and images is divided into four chapters: Food for All, Food for Sustainable Growth, Food for Health and Food for Culture. Each chapter is accompanied by perspectives from several New Food Movement contributors.

The most critical food issues the United States faces today? Nierenberg responded by addressing the topic on a global scale and indicating that climate change and other environmental problems that impact the food system should create a sense of urgency; food production contributes 30 percent or more of all greenhouse gas emissions and there are some 815 million people who are hungry, while another 2 billion are overweight and obese; and that massive amounts of food are lost or wasted before they can reach peoples’ stomachs, at least one third worldwide.

She believes action from the grassroots and the top is necessary, she said by email. She also supports the participation of organizations and communities, researchers and scientists, corporate leaders, and decision-makers to make the food system better. 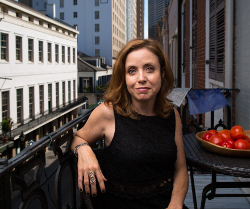 When asked what defines the new food movement the book editor replied, “The interest in food has been growing for decades–wealthy consumers have wanted local, fresh, healthy, sustainably grown food–but today we need a food system that goes beyond our personal lives and impacts the women and men all over the globe who depend on the food system for their livelihoods. We need a food system that focuses on equality among women and men, that considers future generations, that helps create opportunities for young people to become not only food producers, but also scientists and researchers, story tellers and advocates, business leaders, and policy makers who can change the way we grow, process, and consume food.”

The definition of farming and food system for purposes of this discussion is she said, “A food system is all of the activities involving the production, processing, transport, sale, and consumption of food. Sustainable food systems are those that are economically, environmentally and socially sustainable–they are regenerative and resilient by helping build soils, protect water and biodiversity, and they recognize the importance of women, workers, and youth for the future of agriculture.”

When asked about groups in particular need she said, “Poor and underserved communities often are labeled food deserts because of a lack of grocery stores or markets providing healthy food. Racism and lack of economic communities lead to chronic health problems including diabetes, heart disease, and obesity in communities that lack the resources to address these problems.”