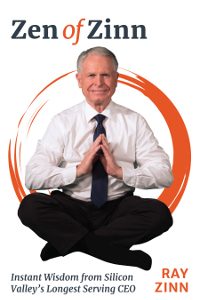 Ray Zinn spent decades as head of Micrel, a financially successful Silicon Valley company. Now that he is retired he founded ZinnStarter to provide seed funding to college students launching new products. The program, still in the initial stages, is at five universities with plans on expansion next year. As part of his efforts to reach a young demographic he spent two years writing Zen of Zinn Instant Wisdom from Silicon Valley’s Longest Serving CEO ($9.95), a 195-page softcover book published this year.

His target audience? “Anyone who seeks understanding and wisdom concerning the dynamics of people, society, business and culture,” Zinn said via a spokesperson by email. His goal was “To impart 37 years of executive insight and 50 years of Silicon Valley experience concerning how people, organizations and society are interconnected.”

The book is divided into an introduction and ten chapters titled: Leadership, Entrepreneurial Lift, Management, Startup Life, Discipline, Determination, Government and Society, People, and Life. Each chapter is made up of small segments of text, many of them a paragraph long.

“Two factors fed into the book’s conception,” he said when asked what prompted him to write a collection of short tips for the entire book. “First, along with my daily observations about business and Silicon Valley that I shared on social media, I offered my insights and experiences into the soft side of people. It were these latter elements to which people reacted most positively. The second factor is that in the 21st century, people want content in small, bite-sized pieces. Hence, I designed the book as a collection of memes, that can be read quickly remembered discretely and shared easily.”

When asked how his first and second books differ he said, “Tough Things First was my management and leadership opus, one specifically for business leaders from founders of brand new startups to seasoned executives. Zen of Zinn is for them as well, but also for the masses. Many parts of Zen of Zinn deal with the spiritual essence of humans, and how that shapes communities and organizations. Anyone looking for insight and uplift will find value in Zen of Zinn.”

When asked “You discuss dignity and respect in the book, how does that align with the lack of diversity in Silicon Valley and elsewhere?” he replied, “Indeed, part of my goal with Zen of Zinn and Tough Things First was to show that dignity is tied to profitability. Respecting the dignity of all people was a cultural foundation of my company, Micrel, and we were profitable 36 of our 37 years (and the one unprofitable year was a paper loss due to the closing of a redundant facility).

As you suggested, a lack of dignity and a lack of diversity are often interrelated. Any action that marginalizes people because of their differences is a form of disrespect and an afront to their dignity. This in turn results in lower diversity. This is a shame because diversity breeds innovation. Too many Silicon Valley companies are losing out because they do not encourage a corporate culture that values diversity.”

When asked to share wisdom based on personal experience regarding diversity he said, “Two elements come to mind. First, leaders have to put effort into making diversity work. It is not automatic. Simply proclaiming that your company embraces diversity is insufficient. It takes commitment, monitoring, corporate culture shaping, and real work. Second, it requires diversity being part of the corporate culture, part of the organization’s mind set. If you force diversity onto employees that don’t fully embrace it, you may cause more problems.”

When asked if Silicon Valley has peaked he replied, “I say the best parts of Silicon Valley are being cloned elsewhere (my ZinnStarter program is one small piece of this process). Silicon Valley will continue to be itself, but it will slowly quit being the epicenter of technical innovation. That will be everywhere smart people live.”