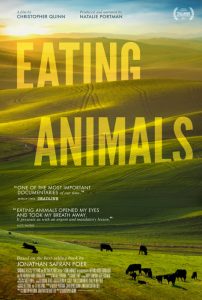 Ever wonder where you eggs, dairy and meat come from? The makers of Eating Animals, a 94-minute film based on a book of the same title by Jonathan Safran Foer, went in search of answers. Over five years they visited farms, spoke with farmers, professors, industry experts, activists, and whistle blowers. They filmed in California, Nebraska, Iowa, North Carolina, China, Germany, India and Sweden.  They imply that the factory farming practices of recent decades have degraded our humanity by making us part of the inhumane treatment of animals, polluted our environment and put our health in jeopardy. For animals lovers some scenes and images may be difficult to watch or forget. Scroll down to see film trailer.

Directed and produced by Christopher Quinn (Sundance award winner God Grew Tired of Us), the film was produced with Academy Award winner Natalie Portman (who also narrates it) and Foer. It indicates that nearly all Americans eat animals products produced in factory farms and that 30 states have passed Ag Gag laws to limit information and images of the harmful factory farming practices. The film opened in New York City June 15, 2018 and will roll out in theaters nationwide in the coming weeks. Information is available at the movie website Eatinganimalsmovie.com.

A statement about the film says: “Eating Animals aims to alter the very frame of public discussion about industrial agriculture and the future of meat, shifting media debates, minds, and markets alike. Moving past any sense that factory farming is a concern only for animal or environmental activists, we paint a vivid portrait of how industrial agriculture unraveled core national values and changed the world for the worse. The fight to end factory farming emerges not only as a fight to eliminate what may be the greatest crime against animal life ever committed, but as a commonsense and economic necessity.”

According to promotional materials for the film the book Eating Animal is the only book in the category “animal rights” besides Peter Singer’s 1973 classic Animal Liberation that has remained a top ten Amazon bestseller since 2009; the U.S. version of the book has sold 400,000 copies and the book has become an international bestseller with language rights sold in 27 countries.