As our population ages there is rising inequality 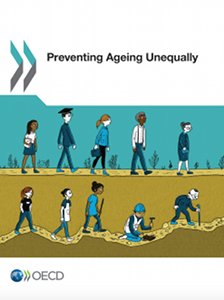 In the United States, employment among the prime working age population is lower now than it was in 2000, according to the Organisation for Economic Co-operation and Development (OECD). In 2000, 82 percent of 35 to 44 year old men and women worked. By 2016 only 79 percent of them worked. It is one of few countries studied by the organization where that is the case, leading researchers to conclude that is one of the main reasons for the growth of inequality.

In Preventing Ageing Unequally, a 256-page report the OECD released recently, representatives from the Paris based organization suggest that ensuring more people work for more years may result in higher retirement incomes in the future. Data in the report, which is available for online purchase as a PDF file for $42, indicate that more than four-fifths of the highly educated working age population have a job, but only about half of those with low education levels are employed.

According to the report summary, income disparities among today’s young and prime age adults are significantly higher than they were among the Baby Boomers when they were the same age. The income of the richest 20 percent of those of working age is eight times higher than that of the poorest 20 percent today.

Since incomes in retirement depend on the earnings of workers throughout their lives OECD analysts expect inequality in the working age population to lead to higher inequality among future retirees. This is particularly alarming in the United States as old age inequality among current retirees is already higher than in all other OECD countries, except Chile and Mexico. See OECD Income Inequality in Old Age chart below for details.

The report predicts that younger generations will face greater risks of inequality in old age than current retirees, and that the experience for generations born since the 1960s may change dramatically. Also since family sizes are dropping, there is higher inequality over working lives, and reforms have cut pension incomes some groups will face a high risk of poverty, the new report suggests.

Across its member countries Preventing Ageing Unequally found that in 1980, there were only 20 people aged 65 and over for every 100 of working age; by 2015 there were 28 and by 2050 the analysts projected it will almost double to reach 53. Many OECD and emerging economies are aging much faster. In the United States, the country summary indicates, there are only 25 people over the age of 65 per 100 people of working age at the moment, but this is expected to rise to 41 by 2050.

The report also anticipates that future elderly will be in more diverse situations, where people may live longer but more will have been unemployed at some point in their working lives and earned low wages, while others will have enjoyed higher, stable earning paths. 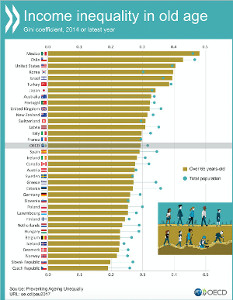 Inequality begins at an early age, according to the findings. For example, a 25-year old university educated man may live almost eight years longer than his less educated peer, on average across countries; for women the difference is almost half (4.6 years). Health impacts the ability to work and earn, the report summary indicates; and over a career, poor health reduces lifetime earnings of low educated men by 33 percent and 17 percent for highly educated men.

In the United States, health problems also contribute to increasing inequality, according to the country report summary. It indicates that Americans are far more unhealthy than their peers in other countries; that people from low socioeconomic backgrounds are affected by bad health more than those from high socioeconomic ones; and that this is demonstrated by the large life expectancy gaps between high and low educated groups.

Disabilities, depression and obesity are widespread, according to the report. More than one third of American adults are obese, more than in any other OECD country. The report proposes that the authorities institute policies to target vulnerable groups as early in life as possible to prevent health, labor market and other socioeconomic disadvantages.

Preventing Ageing Unequally, published October 18, 2017, examines the development and interaction of two global mega trends of population, aging and rising inequalities, within and across generations. According to the website description, the report has 13 tables and 120 charts, shows how inequalities in education, health, employment and earnings compound, resulting in large differences in lifetime earnings across different groups; and suggests a policy agenda to prevent, mitigate and cope with inequalities. The OECD, working with over 100 countries, is a global policy forum with a mission to promote policies to improve the economic and social well being of people around the world.