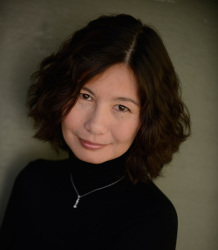 A podcast interview with filmmaker Dana Ziyasheva, is available in the Podcast Section of Hispanic Marketing & Public Relations, HispanicMPR.com. During the podcast, she discusses the film Defenders of Life  (see With video – New film addresses underage marriage among indigenous people) with Elena del Valle, host of the HispanicMPR.com podcast.

Dana, born in Almaty, Kazakhstan, in 1972, dreamed of becoming a writer and filmmaker. But in the Soviet Union of her childhood, opportunities for a middle-class Kazakh girl from the empire’s outskirts to make a career in cinema were virtually nonexistent. Instead Dana graduated from Kazakh State University and became a television journalist in the field covering police patrols as well as natural and political disasters.

In 1994, she used her fellowship at the Central European University in Prague, Czech Republic, to foray into Western Europe. No one, not even the Kazakh government, could believe it when the United Nations Educational, Scientific and Cultural Organization in Paris offered her a position as the youngest and first-ever international civil servant from Kazakhstan. Despite initial disapproval from her own government, Dana spent the next 20 years working for the UN in Paris, Iraq, China and Costa Rica. Between missions, negotiating with governments and implementation of international conventions and UN Plans of Action, she was involved in audiovisual projects with Central China TV and China Film Group.

To listen to the interview, click on the play button below, scroll down until you see “Podcast” on the right hand side, then select “HMPR Dana Ziyasheva” and click on the play button below or download the MP3 file to your iPod or MP3 player to listen on the go, in your car or at home from the RSS feed. Some software will not allow flash, which may be necessary for the play button and podcast player. If that is your case, you will need to download the file to play it. To download it, click on the arrow of the recording you wish to copy and save it to disk. The podcast will remain listed in the April 2017 section of the podcast archive.