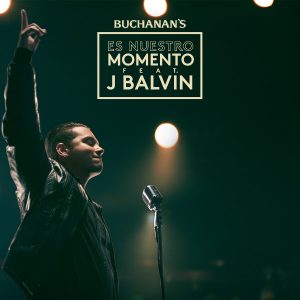 Hoping to connect with reggaeton music loving bicultural adult Latinos, 21 and older, who balance two cultures Buchanan’s, a Scottish whisky maker, partnered with SoundCloud to offer them the Es Nuestro Momento Feat. J Balvin contest campaign and competition. The contest ran March 6-20, 2017. The prize was a trip to the 2017 Latin Billboards in Miami and a chance to meet J Balvin in person. It included a microsite where participants could watch the Es Nuestro Momento video with Balvin singing a capella vocals of a new and unreleased track by the same name. To enter the contest, they were required to create their own version of the song including Balvin, and upload their version to the website for people to vote for their favorite version by April 7. Balvin will select the winner and announce his or her name via his Facebook page April 19. Scroll down to watch an Es Nuestro Momento campaign ad.

The contest was a segment of Buchanan’s integrated marketing campaign, which was promoted through out-of-home advertising, television spots, digital ads with dedicated responsible drinking creative, social media and experiential, in addition to this consumer contest. According to a spokesperson, the contest was “being amplified through PR, digital, social, and paid integrations including Nylon En Espanol, Telemundo, and Billboard.”

Balvin’s song, inspired by the brand’s recent 360 Es Nuestro Momento marketing campaign, was designed to celebrate the Latino community and its positive influence on American mainstream culture. A campaign spokesperson did not respond to a question about measurement of the contest results. According to a press release, “Through this contest, Buchanan’s aims to inspire people to pursue their passions and celebrate their successes.”

Born in Medellin, Colombia, J Balvin is a Latin-Grammy and Latin Billboard-winning musician. He became the first reggaeton artist to surpass one billion views on YouTube. He has collaborated with artists including Pharrell, Daddy Yankee, and Justin Bieber. SoundCloud is an online audio distribution platform where users may upload, record, promote, and share their original sounds.