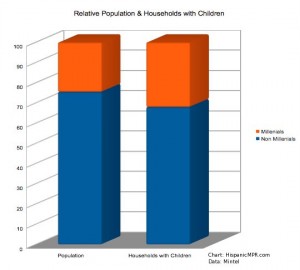 In the United States, two thirds of Millennials have never been married, according to Marketing to Millennials US February 2014 Executive Summary, a Mintel report. Those who got hitched are in their late twenties. The median age for first marriage is about 29 for men and 27 for women. Thirty-two percent of households with children are Millenial households. At the same time, 43 percent of Millenial households include children.

There’s a notable difference in household income between younger and older Millenials. While Younger Millennials, those under 25 years of age, have a median household income of $30,604, the median income of Older Millennials, those 25 and older, is about $51,381. The former may be still be studying or in an entry-level job, whereas Older Millennials may be working full-time and more advanced in their career. Mintel researchers believe the 2008 financial crisis caused median income for those aged 15-24 to decline 13 percent between 2007 and 2012, and decline 9 percent for adults aged 25-34.

At the same time, annual spending for Younger Millennials is 40 percent less than for all adults, while among Older Millennials, average expenditures are about 4 percent less. Younger members of the market segment spend less on everything except education. Older Millennials spend a good deal more than all adults on alcoholic beverages and apparel and services, and significantly less on healthcare.