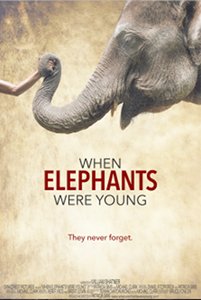 When Elephants Were Young

Canadian filmmaker Patricia Sims cares about endangered Asian elephants, a great deal. She and her collaborators dedicated five years to filming elephants and elephant handlers in Thailand at the end of which they produced When Elephants Were Young, an 86-minute documentary narrated by actor William Shatner. The film, in English and Thai with subtitles, will show at 5:30 p.m. April 8 at the Cinemark Palace, 3200 Airport Road, Boca Raton, and 12 noon April 13 at the Parisian 17, 545 Hibiscus St, West Palm Beach, as part of the Palm Beach International Film Festival in Palm Beach County, Florida.Scroll down to watch a trailer of the film. 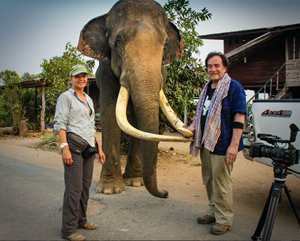 The film follows Wok, a young man, and Nong Mai, his young captive elephant, in their struggle to make a living begging on the streets of Bangkok, Thailand. When the opportunity arises to release Nong Mai to the forest Wok must decide, torn between his affection for the elephant who is also his only source of income, what is best. Can an elephant who has only known a life of captivity survive in the wild? The film zooms into the daily lives of its protagonists, examining the paradoxes of elephants in captivity.

According to Sims, When Elephants Were Young will appear in theaters across North America on World Elephant Day, August 12, 2016. Theater listings should be available in June. Around that same time it should become available globally on various video on demand platforms such as iTunes and Amazon. In Canada, it is slated for broadcast on the CBC Documentary Channel in fall 2016. 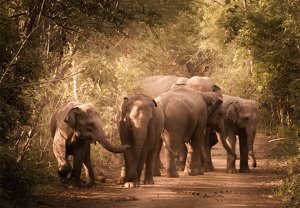 Asian elephants in Thailand from the film When Elephants Were Young

“There were many, many challenges, as is often the case with independent documentary filmmaking!” Sims said by email when asked about the biggest challenge she faced in the making of the film. “For sure, funding was a big challenge, and continues to be so even for this release stage of the film. There are many costs required to release our film, or any film, to the public. Often people are surprised to learn what is involved in the distribution stage for independent film, and what it takes to get a film out to the world.” 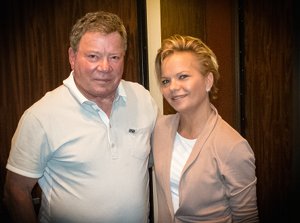 The film’s budget was under one million dollars. Sims relied on “a combination of self-funding, crowd-funding, and private funding and a lot of in-kind support from many generous people who wanted to help us tell this story, and support the elephant cause.”

When asked about the rewards and surprises along the filmmaking journey, she replied, “We’ve had many amazing surprises and rewards with this film! Unfortunately, I can’t mention what they are here because it will ruin the ending of the film’s story. People will have to watch the film to see what our biggest surprises and rewards have been!”

Sims was director and producer and she co-wrote the documentary with Michael Clark. She has a passion for large-brained megafauna such as dolphins, primates, and elephants. She and the Elephant Reintroduction Foundation launched World Elephant Day on August 12, 2012.

As technology activist, cinematographer, and editor, Clark has employed his talents to portray the interconnectivity of life on this planet. He has won international awards for his work and his credits range from documentaries to episodic television, commercial and feature film productions. He seeks “to use digital and traditional media to inspire awareness, awe, and action for a mirthful, sustainable future.”