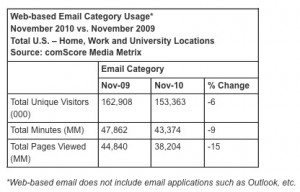 Emails reach more than 70 percent of the U.S online population each month. And, in November 2010, more than 153 million people visited web-based email providers, according to an online data company. Although email remains one of the most popular online activities are people relying less on web based email systems (that excludes applications like Outlook and Thunderbird) and more on mobile email?

A November 2010 comScore study indicates that may be happening. The study found the number of visitors to web based email sites declined 6 percent during that month compared to the previous year. During the same time period, the number of users accessing email via their mobile devices grew 36 percent.

In terms of engagement, the company’s analysts believe overall time spent in the email category declined 9 percent, while total pages viewed dropped 15 percent. Could part of the shift from web based email to mobile email and the level of engagement be the result of higher unemployment nationwide? Is it possible fewer people are accessing emails on the web and surfing online while working because there are fewer people employed?

Although the company’s analysts concluded there was a general change in email related behavior across age groups below 55 they believe young email users between the ages of 12-17 showed the sharpest decline in usage of web based email during the past year. They believe the number of visitors from this age segment declined 24 percent and engagement dropped by half as total minutes fell 48 percent and total pages dropped 53 percent.

There was a greater drop in usage among men; total email minutes for that period dropped 12 percent for men compared to 7 percent for women. On the other hand, use of web based email increase among older adults. Among those 55 to 64 accessing web based email increased 15 percent with similar gains in engagement; users older than 65 experienced gains across all three metrics.

ComScore, Inc., a digital measurement company, relied on data from the company’s comScore Media Metrix, which relies on panel-based and website server-based metrics, and MobiLens, a mobile media measurement tool, for the study. The habits of users of mobile devices aged 13 and older were examined in the study.