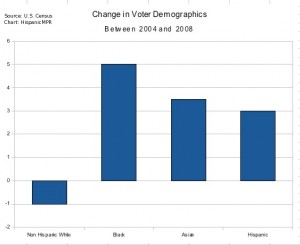 Sixty-six percent of white non Hispanic voters voted in 2008. That represents a 1 percent decrease compared to 2004. In contrast, minority voter participation increased over the same time period, according to recently released United States Census data. Black turnout at the polls went up 5 percent to 65 percent; Hispanic turnout went up 3 percent and Asian voter turnout went up 3.5 percent, making each group reach almost 50 percent. Many, if not most of these people, cast their votes in favor of the new Democratic President.

Viewed as an unlikely combined voting block the three minority groups would represent almost one quarter of all voters. While they may not agree on all their political viewpoints, in the most recent election, according to the Census, they agreed on one individual, Barack Obama. Among voters 18 to 24 black voters had the highest turnout rate at 55 percent. That represents an 8 point increase compared to 2004. White turnout remained at 49 percent while Asian turnout was 41 percent and Hispanic turnout was 39 percent.

What do these numbers say to marketers and politicians? That the voter profile is changing. There are many ethnic and cultural groups represented among the young adults joining the ranks of voters and they bring with them their own unique perspectives about voting and the election process. This is easy to see in states with a population rich in minorities.

In Florida, for example, almost all of the new 579,000 voters were black or Hispanic. And turnout among young voters increased 10 percentage points from the last election, from 39 percent to 49 percent. Those 75 and older, on the other hand, were less likely to vote. Their numbers dropped from 72 percent to 69 percent between the two election years.

If these changes continue in future elections it would appear the minority vote is growing and may again play a role in the overall voting outcome. Those in the business of influencing political opinions may want to keep that in mind as they craft political messages and outline campaign efforts in the future.