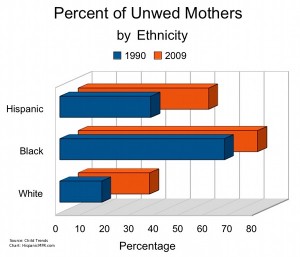 Unwed Mothers in the United States – click to enlarge

When it comes to marriage there are clear distinctions between ethnic and racial groups. It seems white and Hispanic women are more likely to ever marry than are black women. At the same time, Hispanic women who marry tend to do so at a younger age than do women of other ethnicities, according to information provided by a research scientist at Child Trends, a Washington, D.C.-based nonprofit, nonpartisan research center that studies children at all stages of development.

Researchers estimate that more than half of all births outside of marriage are to cohabiting couples. Sixty-five percent of nonmarital births to Hispanic, 61 percent to white and 30 percent to black women are to cohabiting couples. Hispanics living together with children tend to be more stable unions over time than couples of other ethnic backgrounds.

When it comes to having their first child there are also differences. For example, the average age at first birth for white women is 26 years compared to 22.7 years for black women and 23.1 years for Hispanic women. Hispanic women have, on average, more children than do white or black women.