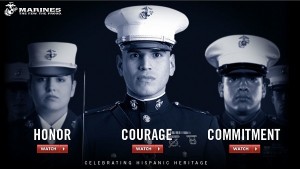 Last month, the United States Marine Corps ( (USMC) launched Family Values, its first Hispanic Heritage Month promotional campaign consisting of snippets of testimonials and profiles of American citizens with backgrounds from Mexico and Puerto Rico. The idea behind it was “to celebrate the strong positive ideals shared by Hispanic Americans and the Marine Corps” through the personal testimonials of Latino men and women currently serving in the Marine Corps.

According to Wikipedia Hispanics account for 18 percent of enlisted Marines today. The site indicates 13 Hispanic Marines, such as France Silva and Guy Gabaldon (see WWII hero to be recognized in documentary to be released April 8), have received the Medal of Honor. A 2004 report, Recruiting Hispanics: The Marine Corps Experience Final Report by Anita U. Hattiangadi, Gary Lee, and Aline O. Quester of the Center for Naval Analyses, the Marine Corps has been very successful recruiting Hispanics.

The Family Values multimedia campaign had print and radio public service announcement extensions and was scheduled to appear on YouTube and Facebook. It included banners and Web page takeovers on ESPN.com, MLB.com, NFL.com and MySpace.com from September 15, 2010 through October 15, 2010. Scroll down to watch a video clip of the Family Values campaign. 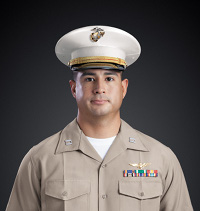 “The ideals of honor, courage and commitment are not exclusive to the Marine Corps,” said Lieutenant Colonel Darrin Kazlauskas, assistant chief of staff for advertising, Marine Corps Recruiting Command. “Hispanic American families, like all great families, instill these values so that each generation can move forward and become positive members of their communities. We are proud to serve with all our Marine brothers and sisters who hold these values in high esteem.”

Through Family Values the Marine Corps set out to offer the public a window into the personal lives of the Hispanic Marines profiled in the ads with the intent of leading the audience to believe that there are ways in which the fundamental values of Hispanic Americans and the Marine Corps are one. 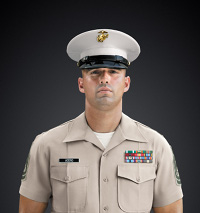 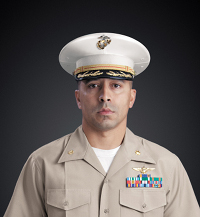 The concept development of the campaign, created jointly by the United States Marine Corps and UniWorld Group, commenced in April of this year. A spokesperson declined to identify a target profile or share details regarding the human or budget resources assigned to the project.

“We have seen traction of the media materials, especially the video content on key websites such as YouTube. Our Facebook threads have also generated positive comments from our fans and followers. We have been pleased with the campaign and believe that it is working to create a positive public dialogue about the supreme ‘call to service’ and the individuals who accept that call,” said a campaign representative by email in response to a question about campaign measurement efforts.

The Marine Corps executes a Black History Month campaign annually. This year’s BHM campaign was entitled, The Line, and traced the history of African Americans within the Marine Corps. The visual mechanism used in The Line was the blood-stripe or red piping located on Marine uniforms. That campaign included a TV spot, print ads, banner ads, a radio spot and a dedicated website.