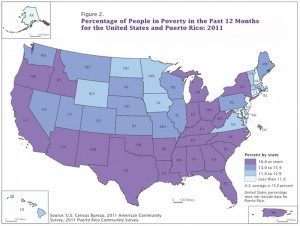 Poverty numbers, unlike median household income numbers, increased in 17 states for the same time period according to the report Poverty: 2010 and 2011, which compares poverty rates in 2010 and 2011 for the nation, states and large metropolitan areas. At the state level, New Hampshire (8.8 percent) had the lowest poverty rate, and Mississippi (22.6 percent) had one of the highest poverty rates. The map above illustrates how most of the bottom half of the country, marked in purple, has a high percent of poverty.

In metro areas with populations of 500,000 or more, poverty rates ranged from a low of 8.3 percent in the Washington metro area, to 37.7 percent in McAllen-Edinburg-Mission, Texas. For 10 states, this was the third consecutive annual increase in the number and percentage of people in poverty.