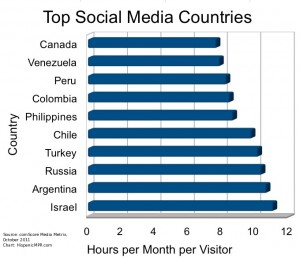 In many countries social networking has become ubiquitous. The mode of communication has become an essential part of people’s daily lives. Traversing international boundaries social networking has turned into the most popular online activity, according to It’s A Social World Top 10 Need-to-Knows About Social Networking and Where It’s Headed, a December 2011 comScore report. ComScore tracks online behavior and usage.

Where people used to send emails and use instant messaging software to communicate many now rely on social media, the report says. In the United States (98 percent) and Canada (94 percent) social media site penetration, comScore staff believe, is nearly pervasive. They also estimate 41 of the 43 markets individually reported by comScore exhibit a market penetration of 85 percent or more.

When the researchers examined total time spent online, Israel was the most active country, followed by Argentina, Russia, Turkey, Chile, Philippines, Colombia, Peru, Venezuela and Canada. People in the Asia Pacific region, particularly East Asian countries, spend the least amount of time on social networks, according to the comScore findings.

Facebook is the undisputed leader in most countries. In October, Facebook reached 55 percent of the world’s audience, accounting for about three in every four minutes people spent on social networking sites and one in every seven minutes they spent online per comScore data.

Microblogging, mainly Twitter, is booming worldwide. Twitter reaches one in ten internet users around the planet to rank among the top social networks. In the last year it grew 59 percent. While initially users in the United States drove social media and microblogging growth that is no longer true. Only 19.8 percent of Facebook users, 20 percent of Twitter fans, and 38.2 percent of LinkedIn users are in the United States.