In U.S. 50 million hungry in 2009, especially in homes with single parents, blacks, Hispanics 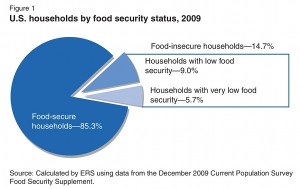 In 2009, 14.7 percent of residents of the United States or about 50 million people in the Land of Plenty suffered some form of hunger, representing the highest number of households suffering from hunger since 1995 when the first such survey took place. This included 5.7 percent of households where one or more household members ate less and their eating patterns were interrupted sometimes due to lack of money or food. The figures reflect no significant change compared to the previous year although 57 percent of all food-insecure households benefited from a Federal food and nutrition assistance program during the month prior to the 2009 survey.

Another way to look at it that last year only 85 percent of American households had access to enough food for an active, healthy life, according to the Household Security in the United States, 2009, a 62-page report written by Mark Nord Alisha Coleman-Jensen Margaret Andrews Steven Carlson and published by the United States Department of Agriculture (Nord, Mark, Alisha Coleman-Jensen, Margaret Andrews, and Steven Carlson. Household Food Security in the United States, 2009. ERR- 108, U.S. Dept. of Agriculture, Econ. Res. Serv. November 2010)

The states with the highest percent of households with insufficient food were Arkansas (17.7 percent), Texas (17.4 percent) and Mississippi (17.1 percent); the states with the lowest percent of households where occupants went hungry in 2009 were North Dakota (6.7 percent), New Hampshire (just under 9 percent) and Virginia (9.2 percent). Some 17.7 million people (6 percent of Americans) compared with 1.3 million in 2008 had multiple times when they did not have enough food and could not afford meals.

Tags: hunger in united states 2009, most affected by hunger, states with most hungry people