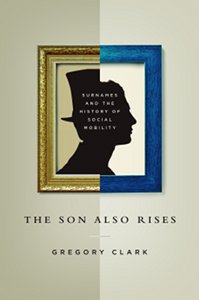 Is there a relationship between the social status of parents and that of their children or grandchildren and so forth? Does someone’s path to success depend on the status of their parents? Is nature stronger than nature when it comes to finding success? While no one has all the answers a recent book addresses the complex and controversial subject with academic aplomb and thoroughness.

Despite common perceptions about rapid and pervasive social mobility, close scrutiny of historic data by surnames (passed down through fathers) in various countries indicates there are much lower rates of social mobility when surname data is used to calculate social mobility rates than when conventional measures are applied, according to Gregory Clark, author, The Son Also Rises: Surnames and the History of Social Mobility (The Princeton Economic History of the Western World) (Princeton, $29.95), a book on the subject published this year. Social mobility, he goes on to say, may take place at a similar rate for several measures of status such as education, wealth, belonging to the politically elite and work or employment status. The rate of persistence, his analysis indicates, is constant across starkly varying social systems. The results, he finds, are widely varying between surname groups and individual families.

In the United States, he says in the Introduction, members of poor minority groups appear at first glance to be facing a tougher path to mobility than the mainstream. Blacks, Native Americans, Latinos and Jewish Americans experience a slower movement toward the mean than may be expected. However, because they have high visibility and many believe the majority has rapid mobility they may erroneously appear exceptional when they’re not. 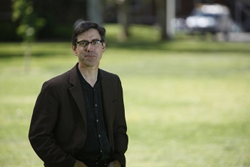 In the book, he examines data from England, United States, Sweden, India, Japan, Korea, China, Taiwan and Chile and concludes that surnames are a useful tool to measure social mobility. They reveal a much slower rate of intergenerational mobility than commonly believed by some sociologists and economists. Social status, he concludes, is an inherited trait like height. Although it may take many generations, social mobility, he estimates will eventually level out, erasing advantages or disadvantages. The variation in social status, he says, may be predicted based on family background, who might be driven to succeed and have the ability to do so, between 50 and 70 percent of the time.

The 364-page hardcover book is written in language likely to appeal to academics and peppered liberally with graphs and analysis. It is divided into sixteen chapters and three main sections, Social Mobility by Time and Place, Testing the Laws of Mobility, and The Good Society.

Clark, professor, economics at the University of California, Davis, is also author of A Farewell to Alms: A Brief Economic History of the World. 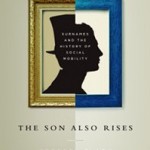