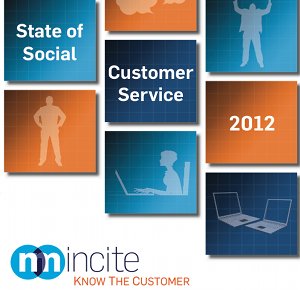 In July 2012, NM Incite, a joint venture between Nielsen and McKinsey & Company dedicated to measurement science and management consulting, surveyed a representative group of 2,000 United States social media users 18 and older using Nielsen’s online panel. In the eight-page State of Social Customer Service Report 2012, they concluded, among other things, that 47 percent of all social media users have used social care, a system for companies to provide customer service in social media platforms. Such usage crossed ages and genders among survey responders and was as high as 60 percent among women 18 to 24 years of age.

Based on the responses to the survey they believe 71 percent of those who said they experience positive social care, meaning a speedy and effective response, said they are likely to recommend that brand to others, compared to 19 percent of customers who said they had had no response. Also, the researchers estimated that nearly one in three social media users preferred to contact customer service through a social media channel instead of calling.

The survey staff found that more than half of social media users 45 and younger said they take advantage of social care. At the same time, those who went to social media to share their gripes or questions wanted responses in their channel.

They also concluded that one negative experience with customer service shared in a public forum could void the effect of five positive customer messages. More than half (51 percent) of people who said they rely on social care said they engage with brands several times each month and 9 percent said they engage daily.