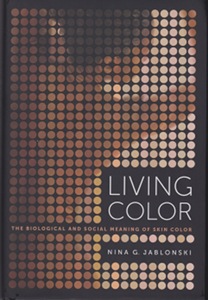 Nina Jablonski, professor, Anthropology at Pennsylvania State University believes there is no such thing as a pure race. Her research indicates skin color developed as a way for humans to adapt to their surroundings and over time became a means, with little relationship to reality, to label someone’s social worth. In Living Color: The Biological and Social Meaning of Skin Color (California University Press, $29.95) she explores these concepts.

The 260-page hardcover book published in 2012 is divided into two main sections. In the first half of the book, she examines the biology of skin tone and how over the centuries skin pigmentation allowed people to adjust to their environment. Skin color in pale people comes from blood and the skins own connective tissues. Eumelanin is the dominant source of skin color in general. Light skin was necessary for populations living in regions with little sunlight while dark skins shades were useful in places with an abundance of sunlight. She addresses the challenges brought about when migration, travel and modern life cause people to live away from their ancestral home, citing vitamin D deficiency as one of the dangers.

In the second half of the book, she delves into the origin of the concept of race saying there is no such thing as pure human populations or races. Over history, she says, people mixed with other people around the globe resulting in mongrel groupings with only minor variances. In time, European elites contributed to the idea of races categorized by skin color, social worth and cultural capability. Because of its association with positive aspects and high standing a preference for light skin arose independently in different countries, according to the professor.

This in turn led to the social stratification, discrimination and racism that endure today. She goes on to say in the closing chapter that in the United States and many developed countries people with the darkest skin color remain in the “periphery of society” and are physically marginalized suffering from restricted access to high quality education, food, and health care.

Jablonski, recipient of the 2012 Guggenheim Fellowship, is also author of Skin: A Natural History.