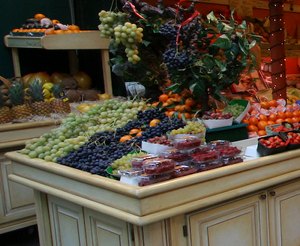 In the last few years organic foods and local products have become increasingly popular. Sales of organic foods are booming. They doubled, from $2.6 billion to about $5.2 billion, in the past four years. A quarter of those who prefer organic foods prefer to buy them from farmers’ markets and other local sources. Some people believe the recession may increase farmers’ markets sales because shoppers are interested in inexpensive alternatives to organic foods.

Although most Americans are mildly supportive of local shopping, Latinos strongly favor local purchases, especially of produce. In general, shoppers think the idea of purchasing goods and services from the mom and pop store near their home is quaint but when it comes to actually patronizing the store their enthusiasm wanes, according to Mintel. The market research company conducted a survey to identify shopper attitudes about buying local products and services and recently released a summary of the results.

“We found that although the ‘buy local’ mantra has gotten strong media coverage and government support, most Americans haven’t yet incorporated it into their lifestyles,” said Krista Faron, senior analyst at Mintel. “Nonetheless, local products offer unique benefits and are more accessible than ever before, so we think the local movement has relevance with today’s consumer.”

Only 17 percent of adults nationwide, according to Mintel’s consumer survey, buy local as often as possible. Those who do are willing to pay a premium and select local goods and services over non local ones even when the local items are less competitive in quality. Mintel researchers believe adults 25-34 year old and families with children as the most zealous local shoppers.

The researchers think parents believe that local food items are fresher and healthier than packaged products. At the same time, parents want to belong to strong communities that provide a good environment for their children, and feel that making local purchases helps to strengthen their community.

What people are most likely to buy near where they live is food. Fruits and vegetables are by far the most common items. Almost one third of the survey respondents (31 percent) said they purchase these items once a week or more often. Other common local purchases selected by 25 percent of shoppers are baked goods, meats or cheese/dairy products.

Local buying may be influenced by other factors. For example, almost one third (30 percent) of respondents to the Mintel survey thought the idea of buying local had appeal but didn’t know where to find what they sought; and 27 percent of shoppers who participated in the survey indicated they were indifferent about the source of their foods and services.

“Local is becoming a desirable product claim, as people try to save money, support their communities and preserve the environment. We found that over half of local shoppers are trying to help their local economy, but they also buy local products for convenience, better taste and the environment. Companies should use these motivations to craft marketing messages that appeal to locally conscious consumers,” said Faron.

Hispanics like local produce. Those that responded to the survey indicated they were likely to buy produce at least once a week. In August 2006, Mintel’s Hispanic Meals at Home U.S. Revealed that individuals who identify themselves as Hispanic were more likely than those who think of themselves as Americans to mostly cook from scratch.

Young Hispanics, in particular, prefer to buy local. Latinos and blacks aged 18-34 who participated in the Mintel research said they are more likely to purchase locally sourced meals in a restaurant or food service at a farmers’ market.