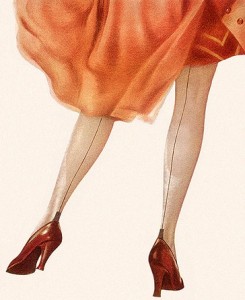 Do race and ethnicity influence attitudes toward clothes? Probably. And, the concept of work clothes changes over time. Suits, for example, are required less frequently for women overall today than they were some years ago. While the suit has fallen out of popularity in general, it seems to have remained a staple in the wardrobe of black women. Black working women are three times more likely than average to have bought a suit in the last year, according to a recent Mintel survey. They are more likely to rely on shoes, boots, belts and jewelry to complete their outfit.

In spite of their conservative dress attitudes regarding suits black women respondents said they are much more likely to take fashion chances; and try out new designers and new brands before they become mainstream. Hispanic working women who responded to the survey said they consider designer labels important. At the same time, it appears from their responses to the survey questions that black, Asian and Hispanic working women are much more likely to visit a retailer in search of brand names.

For some women brand names provide an image boost; for the white women surveyed they represent a comfort zone. Researchers were left with the impression that once these consumers identify a brand they like they tend to return to it. As a result retailers that carry different brands all the time may have difficulty drawing these shoppers.

Hispanic, black, and Asian women said it is much more likely that they are no longer wearing the clothes they wore last year, suggesting that these women shop for work clothes much more often than non-Hispanic white women.

Perhaps because they are young as a group (the Latino population is generally younger than the overall population.) Hispanic women respondents are significantly less likely to say that they look for timeless or conservative looks.

According to a company representative, fieldwork was conducted online in August 2009 among a sample of 503 working (outside the home) women parents 18 and older with access to the internet. Mintel is an international supplier of consumer, product and media intelligence.