Why early adopters may be important for marketers 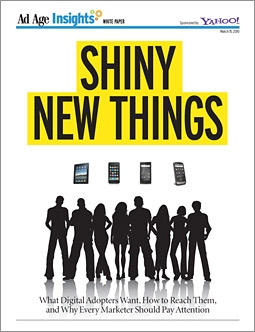 For six weeks Laura Rich researched early adopters of digital technology focusing on their use and purchase of mobile devices, software, computers and televisions. She believes they play a pivotal role for companies introducing new products into the marketplace and highlights that this group of white men, mostly, “can be identified by what they do, not who they are.” Although she identified studies that indicate Latinos often take advantage of digital technologies at rates higher than the general market; what matters more than their race and gender and where they work (often technology companies), she points out in a white paper, is their use of information, and the way they buy products and share their opinions with like minded others.

These opinions can affect the acceptance or rejection of a new product into the market. Aware that their opinions matter these first users of technology products want to be heard by marketers and product makers, she says. Win their favor and you gain an advantage; risk their displeasure and prepare for the consequences, she points out illustrating with examples from well known companies such as Apple, Google, and AT&T.

The staff writer at AdAge shared her findings in Shiny New Things: What Digital Adopters Want, How to Reach Them, and Why Every Marketer Should Pay Attention, a white paper about what would be “most relevant to marketers wanting to reach this crowd.” She concluded early adopters are “opinion leaders” who play a key role in marketing. They are highly educated, have a higher social status and earn higher incomes than traditional consumers. They are often risk takers with high standards for products and companies and are more critical than regular consumers. Many are status seekers who value information more than most other consumers.

Based on her research, she concluded that thanks to the boom in social media, early adopters have a high potential to influence products, especially gadgets and online brands, she describes as “screen power.” Their influence is, she believes, is becoming evident in mega social media sites such as Twitter and Facebook.

In the white paper, she quoted findings from Pew Internet and American Life and Yahoo! studies that outline digital technology use by ethnic groups. A Yahoo! study indicates Hispanics over index in their adoption of technology and media consumption compared to the general population.