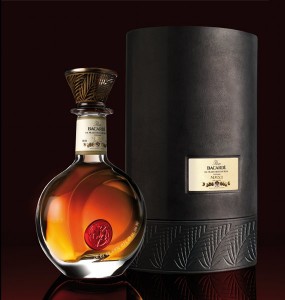 A “blend of the finest rums laid to rest in oak barrels over the last 20 years and finished in 60-year-old Cognac barrels,” the liquid, bottled in a hand-blown crystal decanter made in Mexico then housed in a leather case, retails for $2,000. At its release only 400 decanters were available for purchase at some airports and premium retail shops.

“We had the privilege of working with some incredible stocks of aged rum. We were looking for woody notes and fruity notes. We were looking for the balance and equilibrium that makes a great rum. The depth of flavor and character that this rum has is incredibly unique,” said Guillermo Garcia Lay, Bacardi Family master blender.

“I had an idea of what this rum should be and so did the other master blenders, so we tried to come up with one single Bacardi rum that would be good for all of us. And I think that if it is good for us, I think it will be good for everybody,” said Emilio Bacardí Bravo, Bacardi Family master blender.

The MMXII Vintage is described as “a highly aromatic, full-bodied and generous rum with a mellow flavor.” It is said to have an expansive nose with tropical fruits and sweet floral aromas, balanced with soft vanilla and a smooth oak character and enriched with notes of sweet Caribbean honey and fragrant fruits leading to a “long, pleasing finish with a smooth background of oak.”

The hand-blown crystal decanter was designed to represent El Coco, the coconut palm planted at the entrance of the first company distillery in Santiago de Cuba by the founder’s son 150 years ago. Etched onto the crystal decanter, next to the hand-pressed red crystal bat image, are the coordinates of 20 01 48.69N 075 49 56.86W that mark the birth place of the company rum in Santiago de Cuba. The decanter also features a map of the Caribbean pointing to the original distillery.

Founded on February 4, 1862, and family-owned for the past seven generations, Bacardi employs nearly 6,000 people, manufactures its brands at 27 facilities in 16 markets on four continents, and sells in more than 150 countries.